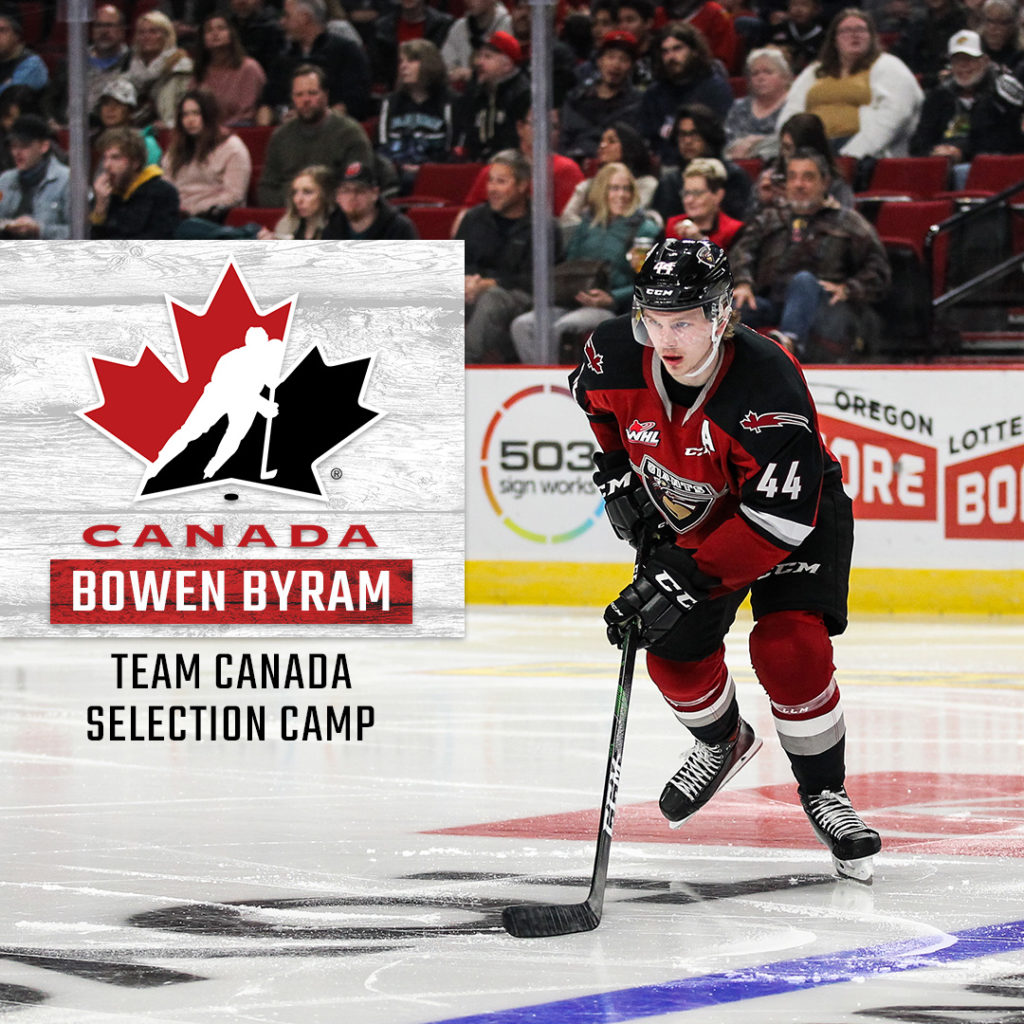 Vancouver Giants defenceman Bowen Byram is one step closer to representing Canada at the IIHF World Juniors. Earlier today Hockey Canada announced that Bowen Byram was one of 31 players invited to attend their National Junior Team Selection Camp taking place from December 9th – December 12th in Oakville, Ontario. Byram was one of 10 defencemen and eight WHL players selected to the camp.

In 24 games this season with the Giants, Byram has scored three goals and 14 assists for 17 points along with a +5 rating and 47 penalty minutes. Byram has appeared in 162 career games for the Giants and has totalled 35 goals and 80 assists for 115 points. In 29 additional playoff games, Byram has added 11 goals and 22 assists for 33 points. Last season he became the first ever WHL defencemen to lead the playoffs in scoring (26 points) and he set a new single-season WHL record with six overtime winning goals. In June he was selected by the Colorado Avalanche with the fourth overall pick.

Bowen Byram looks to become the first Giant to represent Canada at the World Juniors since Brendan Gallagher in 2012. Byram has previously represented Canada at the 2019 Hlinka Gretzky Cup (Gold Medal), the 2018 World Under-18’s and the 2017 World Under-17 Hockey Challenge (Silver Medal). Should Byram crack Canada’s roster, he’d become the 14th Vancouver Giants player to ever compete in the IIHF World Juniors.

Per Hockey Canada’s website: As part of the selection process, Canadian hopefuls will play two games against a U SPORTS all-star team, Dec. 11 at 5 p.m. ET and Dec. 12 at 2 p.m.

Following the camp, the team will travel to Europe for the 2020 IIHF World Junior Championship, looking to add to the 31 medals (17 gold, nine silver, five bronze) Canada has won at the tournament since 1977. Team Canada last took top spot in Buffalo in 2018.

Once a final roster is named, the quest for a gold medal begins in Ostrava on Boxing Day with a cross-border match-up against the United States at 2 p.m. ET/11 a.m. PT.

The Vancouver Giants return to action this week on Wednesday evening in Victoria at 7:05 PM.  The G-Men will then return home next weekend for two huge home games beginning Friday, December 6th against the Spokane Chiefs. The Giants will then take the ice at Rogers Arena on December 8th at 4:00 PM for Chevrolet Teddy Bear Toss against the Tri-City Americans.