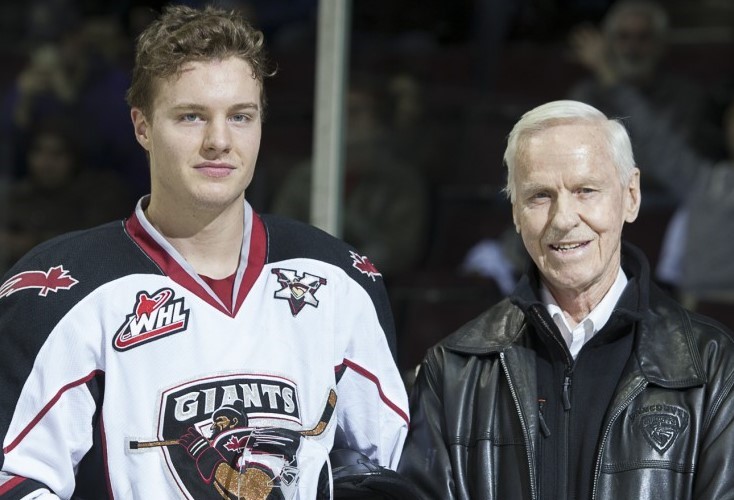 It’s been an exciting month for Ben Thomas. After concluding the WHL season with the Vancouver Giants, the Calgary native, who Vancouver acquired from the Calgary Hitmen early in the 2015/16 season, signed an entry-level contract with the Tampa Bay Lightning of the NHL on March 22nd.

“It was very exciting,” said Thomas of putting pen to paper on his first professional contract. “Obviously, it was just a huge relief to get that done, and myself and my family were very excited.”

The Lightning then assigned Thomas to their American Hockey League affiliate, the Syracuse Crunch. The 19-year-old blue liner made his professional debut in a game against the Rochester Americans on March 26th and has gone on to play five games. Thomas has tallied three assists in that time while also finishing +4.

“The atmosphere is kind of a little bit different,” said Thomas of entering a pro dressing room. “When guys go to the rink, they’re there to work, and it’s their job. It’s a little more intense, and it’s definitely a little different watching some of the older guys and seeing how they bring it for every game and every practice, and there’s no days off.

“When you see guys that are pros and have been doing this for a while, you try to take as much as you can from them because they’re obviously there for a reason. If you want to get to that level and stay there, you’ve got to put in the hours in the gym and work every day or someone’s going to take your spot, so I definitely try to copy and emulate some of the things the older veterans do.”

Thomas also had to adjust his game to succeed at the AHL level, playing against older players and more experienced competition.

“In the WHL, I was able to outmuscle a lot of guys,” he said. “I was able to use my strength a bit more to my advantage, but (in the AHL), I’m not so big, so working on some strength in the summer is going to be huge.”

Thomas admits that he felt nerves going into his first pro game, but after getting his feet under him and feeling a bit more comfortable, he was able to feel at home on AHL ice.

“I was pretty nervous going in, but once the puck dropped, and I got out there for a couple of shifts and felt the puck, I was fine,” he said. “For me, I thought the speed of the game was a lot different, and the players are much bigger than they are in junior. Everything from battling to one-on-one situations are a lot tougher. Guys are quicker and bigger, and they make it harder on you, so it took me a little bit of time to adjust, but after those first couple of shifts, I think I was good.”

While Thomas may have played his last game in a Giants jersey, with the prospect of a full-time job in pro hockey a very serious reality for next season, he looks back on his time in Vancouver in a positive light, in spite of the club’s on-ice struggles in 2015/16.

“It was a tough year for the team. We didn’t do as well as we wanted to, but personally, I was given a lot of opportunity coming to the Giants. I felt like, with that opportunity, I was able to develop a lot more, and I feel like I personally brought my game to another level, and with the amount of trust and ice time that I was given by the coaches, I think that really helped with me getting the contract.”