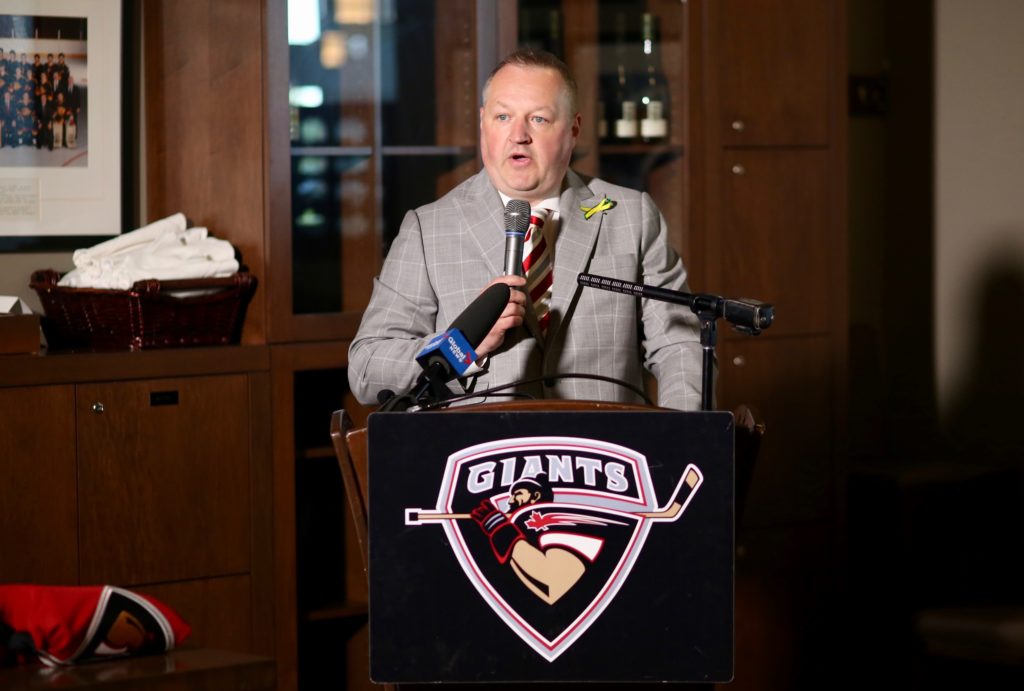 The Vancouver Giants are very pleased to name Barclay Parneta the third General Manager in the history of the franchise. Parneta (Saskatoon, SK) was introduced as the Giants General Manager today at a media conference that took place at Pat Quinn’s Restaurant at Tsawwassen Springs.

Parneta, 47, is no stranger to the Vancouver Giants having scouted with the organization for their first three seasons in the WHL. He rejoins the G-Men after spending the past eight seasons with the WHL’s Tri-City Americans. For the past three seasons, Parneta served as their Assistant GM and Head Scout and for the five seasons prior he worked as their Prospect Development Coach and Head Scout. Some of Parneta’s notable draft picks from previous seasons include: Michael Rasmussen (2014), Morgan Geekie (2013), Dylan Coghlan (2013), Parker Wotherspoon (2012), and Brandon Carlo (2011). Parneta is also heading into his third season as Hockey Canada’s U-17 Western Regional Scout.

Barclay Parneta also brings seven years of amateur scouting experience at the NHL level. From 2003-2008 he scouted for the St. Louis Blues followed by two seasons working with the Phoenix Coyotes. Parneta began scouting in the WHL during the 1989-90 season with the Medicine Hat Tigers and prior to joining the Giants scouting staff he spent 10 seasons on the Tri-City Americans scouting staff.

“Barclay comes to us with a proven track record of drafting, recruiting and developing players,” said Giants Majority Owner, President and Governor Ron Toigo. “He’s a highly-respected individual within the hockey world and we are very excited to have him back with the Vancouver Giants leading us into a very exciting chapter of our franchise’s history.”

“I’m very excited and honored to be named General Manager of the Vancouver Giants,” adds Barclay Parneta. “Both on the ice and in the community, we are going to continue to build a team and a program that hockey fans in the Lower Mainland can be proud of. We’ve got a great thing going with our current core of players and prospects and I look forward to working with the ownership, management team and the coaching staff to build a team that can consistently contend for championships.”

Barclay Parneta speaks on behalf of the Giants for the first time officially. pic.twitter.com/xUEj14sgam

Parneta is joined in Vancouver by his wife Leanne. Together they have a daughter named Alexa who lives and works on Vancouver Island. The Giants are thrilled to welcome Barclay, Leanne and Alexa to the Vancouver Giants family.

Season tickets for the 2018-19 season are available now! Make your deposit and learn more about our exciting ticket options HERE: http://vancouvergiants.com/seasontickets.