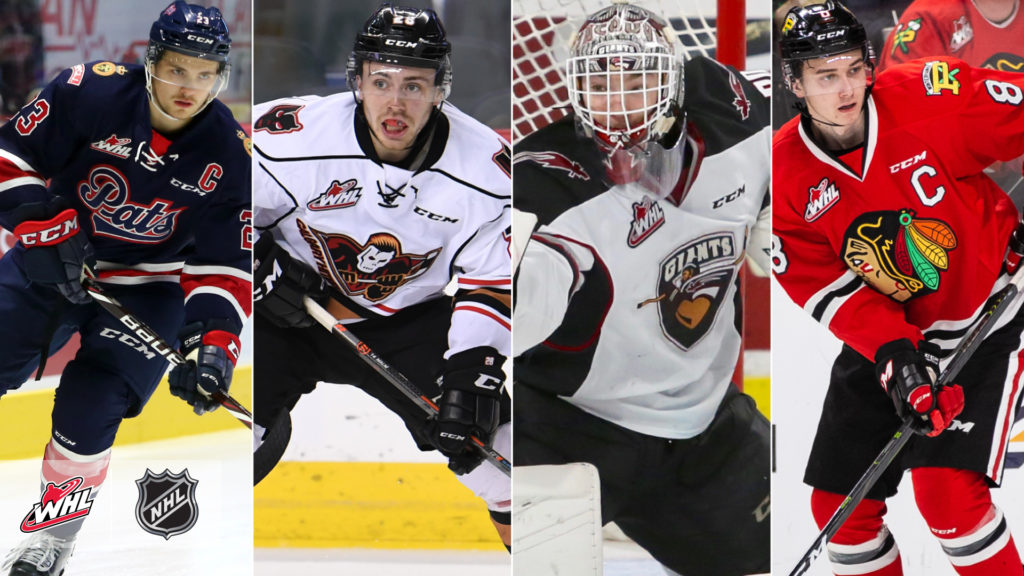 A total of 50 current and former WHL players have received an introduction or more experience at the professional hockey level as NHL Pacific Division teams held their annual development camps.

A break-down by team shows the WHL players listed alphabetically on each team by position and associated with their most current WHL team.

The Ducks had a heavy presence from the WHL’s East Division at their development camp. Steel, a former recipient of the Bob Clarke Trophy as the WHL’s leading scoring in the 2016-17 WHL Regular Season, will look to continue his development after splitting the season between the NHL and American Hockey League in the Ducks’ organization. The same goes for his Regina teammate Josh Mahura. Up front, the Ducks made Moose Jaw Warriors standout and WHL Rookie of the Year Brayden Tracey the 29th-overall pick in the 2019 NHL Draft. Joining Mahura on the blue line was former Prince Albert Raider and Prince George Cougar Brendan Guhle, acquired in a trade from the Buffalo Sabres last season.

🗣: "It's unbelievable. There's a lot of good players here. The guys they pull in here; it's crazy. To play against them is outstanding."@brayden_tracey is impressed with the talent and competition at #DucksDevCamp. pic.twitter.com/E5qeFr6na0

“I want to be a contributor and help us win games, help us get back to the playoffs."

Fully healed from a late-season injury, @guhles_ is taking on a leadership role at #DucksDevCamp and looking to make his mark next season. https://t.co/sKnTnNxyUC

Five current and former WHL players joined the pack of the Coyotes for their development camp. Offensive standout Brayden Burke, World Juniors hero Tyler Steenbergen, and leading Western Conference goaltender David Tendeck played a leading role in the camp. Joining Steenbergen at the camp was Matteo Gennaro, his teammate in Swift Current for 2018 and with the Tucson Roadrunners last season. Newly-acquired Vancouver Giant Jackson Shepard was a camp invite by the Coyotes.

Of the eight teams in the Pacific Division, the Flames had the largest contingent with 12 WHL players invited to their development camp. They also feature a healthy mix of current WHL talent and WHL Alumni. WHL Champion Glenn Gawdin, former Victoria Royal Matthew Phillips, Canada West as well as defenceman Andrew Nielsen and goaltender Nick Schneider all represent players already immersed into the professional ranks. Canada West and U SPORTS standout Luke Philp will join that list shortly after capping off his successful three years with the University of Alberta Golden Bears.

Edmonton Oil King teammates Andrew Fyten and David Kope will also participate in the camp, while Fyten will be reunited with Gawdin from Swift Current as well. From their two previous drafts, forward Milos Roman and goaltender Dustin Wolf will look to impress. After generating NHL development camp interest last year, Montana Onyebuchi is back for another camp, this time with the Flames. Joining Schneider in the Hitmen-to-Flames pipeline this week are forward James Malm and defenceman Jackson van de Leest. The camp begins Wednesday, July 3 at WinSport.

In the first of our two-part series on #Flames development camp, we talk to the team brass about their goals for upcoming the on-ice component. https://t.co/VInGDcPRwl

Looking for the #FlamesDevCamp roster and schedule? Don't fret – we've got you covered! https://t.co/af43rRKLHR

Already featuring several developing WHL Alumni in their organization, the Oilers had a pair of former WHL talents at the team’s development camp. WHL Champion Stuart Skinner recently wrapped up his first season in the professional ranks. Hebig did the same, spending the full season with the AHL’s Bakersfield Condors, recording 29 points (11G-18A) in 64 games.

A trio of masked men are tending the twine for the #Oilers at this year's Development Camp as Stuart Skinner, Dylan Wells & Olivier Rodrigue are all aiming to take big steps in their respective careers next season. pic.twitter.com/9lWbDFv3gi

"The experience they learned in that second-round playoff series was invaluable." #Oilers goalie prospects Stuart Skinner & Dylan Wells split their rookie campaigns between @TheAHL & @ECHL before each getting a start during the @Condors post-season run. https://t.co/HkZlhscWXR

The two-time Stanley Cup Champion Kings held their development camp last week with five WHL players in attendance. The field of five was led by forward Jaret Anderson-Dolan of the Spokane Chiefs. A future Chief in goaltender Lukas Parik was selected by the Kings at the 2019 NHL Draft and later chosen by Spokane at the 2019 CHL Import Draft. Staying in the U.S. Division and in the crease, goaltender Cole Kehler will attend another development camp after his rookie season in the team’s organization. Nino Kinder, a CHL Import Draft selection of the Winnipeg ICE, earned an invitation to the camp. The same went for Giants’ forward Davis Koch, who recently completed his WHL career with the Giants.

If you need us, we’ll be staring at this picture of Alex Turcotte, Jaret Anderson-Dolan and Sean Durzi forever 😍

The Sharks were one of three Pacific Division teams with double-digit WHL players in attendance at their development camp. The 2018-19 WHL Player of the Year, Joachim Blichfeld of the Portland Winterhawks, led the field, joined by WHL Champion Noah Gregor following his outstanding season. Jayden Halbgewachs and Evan Weinger returned to the development camp after their rookie seasons with the San Jose Barracuda. University of Alberta Golden Bears goaltender and former Moose Jaw Warrior Zachary Sawchenko also earned an invitation after inking a contract with the Barracuda earlier this year.

Spokane Chief forward Jake McGrew, a pick of the Sharks in 2017, returned to camp after signing an entry-level contract with the club last fall while the recently-drafted Dillon Hamaliuk made an appearance as well. Adding to the Jake population at the camp, Jake Gricius and Jake Lee both earned camp invites. Nikolai Knyzhov, who played for the Pats in the 2015-16 WHL Regular Season, also attended camp.

28 forwards, 13 defensemen, and 5 goaltenders will be taking the ice for #SharksDevCamp this week. https://t.co/Xz1IppBfgZ

It was a busy season for @Jett_Woo and the right-handed #Canucks defensive prospect made many positive strides this year. https://t.co/gW3DTzdjWQ

Closing out the list, the Golden Knights had 10 WHL players attend their development camp. Led by their first-ever selection in franchise history, Cody Glass of the Portland Winterhawks will be looking to make the jump to the NHL level next season. From the 2017 NHL Draft, Jake Leschyshyn returned to the camp while 2019 second-round pick Kaedan Korczak made his debut. On the blue line, Dylan Coghlan returned to development camp after his first year in the professional ranks with the AHL’s Chicago Wolves. In net, goaltender Dylan Ferguson was brought back to camp after being drafted by the Dallas Stars and eventually signed by the Golden Knights.

The Wheat Kings continued to serve a a ground for non-Canadian talent to develop for the Golden Knights as goaltender Jiri Patera, a pick of Vegas, came to camp as well. One of their 2019 selections in Marcus Kallionkieli was later selected by the Wheat Kings in the CHL Import Draft as well. A trio of WHL players earned camp invites in forwards Jermaine Loewen and Zak Smith as well as WHL Champion Brayden Pachal.

Looks like some of the prospects have their eyes on making the big squad this year 🤔🤩https://t.co/CNLOSlRMZg

🎥 Jiri Patera: I'm trying to do my best to impress all of these guys. I want to impress as many people as I can to hopefully one day sign an NHL contract. pic.twitter.com/VmeqnsROu1