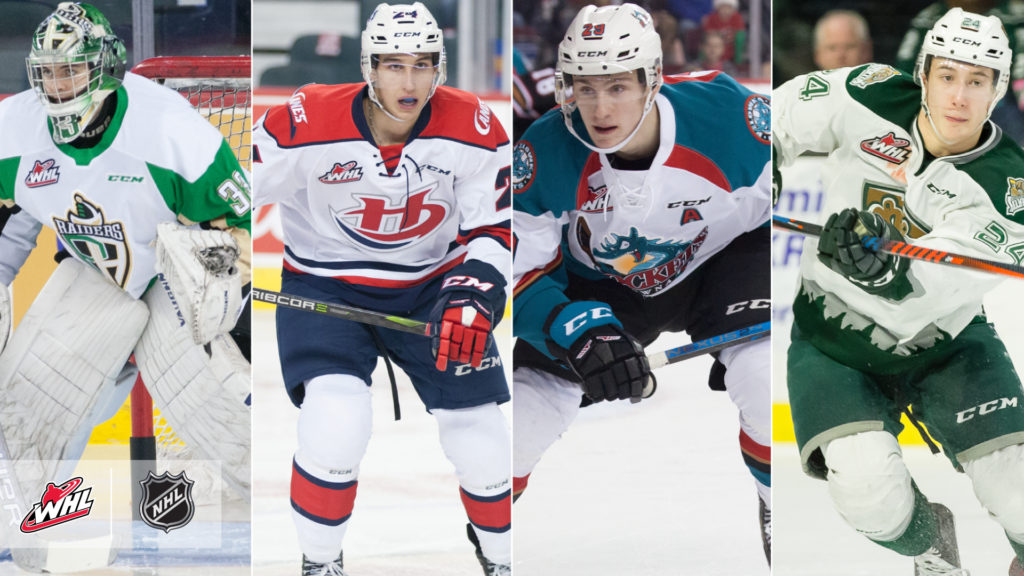 A break-down by team shows the WHL players listed alphabetically on each team by position and  associated with the most current WHL team they’ve played for.

After coming within a game of winning the Stanley Cup, the Boston Bruins quickly transitioned to the off-season and their development camp, which was held in late June. Already boasting developed WHL talent on their roster in the likes of Jake DeBrusk and Brandon Carlo, the Bruins opted to invite a single WHL player to camp this year with Prince George Cougars goaltender Taylor Gauthier earning that invitation. Gauthier’s hockey accomplishments to date include gold medals at the 2016 WHL Cup and 2018 Hlinka Gretzky Cup.

The Sabres’ top selection in the 2019 NHL Draft, Dylan Cozens, led a grouping of three WHL players past and present in attendance at their development camp. The Whitehorse, Yukon product was selected seventh overall by the Sabres at last month’s draft. Also joining him were a pair of skaters from the WHL’s Western Conference in Tri-City American Kyle Olson and former Kelowna Rocket Devante Stephens. The latter of the two won a WHL Championship with the Rockets in 2015.

The guys had @Dylan_Cozens on the show today for the first time!

Dylan Cozens (79) has the quality hands and feet. #Sabres pic.twitter.com/kbb4Vc13cV

For the first time since 2001, the Florida Panthers selected three or more WHL players in a single NHL Draft, which was reflected in their development camp this past weekend. In addition to the trio of U.S. Division players taken in John Ludvig, Henrik Rybinski, and Matthew Wedman, three other WHL players found themselves present at the camp. Current Portland Winterhawk Jaydon Dureau joined his teammate Ludvig at the event as a camp invite.

The Portland connection continued with Latvian forward Rodrigo Abols, who suited up for 64 regular season games with the Winterhawks. Rounding out the group of six was former Medicine Hat Tiger Dylan MacPherson, who completed his WHL career in March and later joined the Panthers’ American Hockey League affiliate, the Springfield Thunderbirds.

Thanks @Marlins for hosting our 2019 Development Camp prospects at tonight’s game! pic.twitter.com/5g6Sp0cvoE

"We want to create that culture and bond that all good teams have and it starts today."

More from day one of #FlaPanthers Development Camp ⬇️ pic.twitter.com/h9LyS3FsiO

The WHL’s influence on the Montreal Canadiens’ blue line extends throughout their organization with the likes of Shea Weber and Noah Juulsen, but the impact has also been felt in their pool of prospects as well. Led by Moose Jaw Warriors captain Josh Brook and former Kootenay ICE captain Cale Fleury. Add in 2019 draft pick Gianni Fairbrother and the Canadiens certainly know where they like to get their defensive talent from. Camp invite Dylan Plouffe from Vancouver’s blue line and that adds to the experience as well. Up front, WHL Champion Cole Fonstad returned for his second development camp after begin drafted by the Canadiens in 2018.

Josh Brook scores in the shootout to end the final scrimmage of Development Camp. pic.twitter.com/YFNTRunxUX

Beautiful zone entry by Poehling, and Fairbrother hammers it home!

With six picks in the 2019 NHL Draft, the Ottawa Senators used three of them on WHL players, including two of their first three choices. This parlayed into the Senators tied for the lead in the division in terms of WHL representation at development camps this year. First-round pick Lassi Thomson led the way among those most recently selected. A pair of Central Division talents in Søgaard and Kastelic also joined the organization a day later at the draft.

For the second year in a row Parker Kelly is named the hardest working player and recipient of the Jonathan Pitre Memorial Award for #SensDevCamp. pic.twitter.com/EFLxzJaIow

“To share that moment with Tina for the second year is something I’ll remember for the rest of my life.“

Sens prospect Parker Kelly became only the second player to have his name inscribed twice on the Jonathan Pitre Memorial Trophy awarded to the hardest worker at Dev Camp. pic.twitter.com/yF4Yuxu8Lz

The Tampa Bay Lightning had four WHL players attending their development camp, including their two newest acquisitions in Rockets’ forward Nolan Foote and Blazers’ defenceman Quinn Schmiemann, both selected at the 2019 NHL Draft. A sixth-round pick from 2016, former Warrior Oleg Sosunov also participated in the camp. Spokane Chiefs forward Eli Zummack, who generated NHL interest last year, earned an invite as well to round out the quartet. Looking below, there’s early chemistry between Foote and Sosunov, who helped their team capture the three-on-three championship at the camp.

“[Dev camp] was really good, learned a lot. You learn a lot from other players, watching them.”#BoltsDevCamp | Nolan Foote: pic.twitter.com/BCVGca1Pxq

The Battle of Ontario extended to the development camp this season as the Senators and Toronto Maple Leafs each tied for the most WHL players present with seven each. A season full of awards and recognition had WHL Champion and WHL/CHL Goaltender of the Year Ian Scott from the Raiders lead this year’s crop of WHL talent into the Leafs’ camp. He was joined by teammate Sergei Sapego, who earned a camp invite.

A pair of WHL players selected by Toronto in the 2018 NHL Draft, Riley Stotts and Filip Kral, reunited in the six. Earning invitations were a pair of Central Division talents in Tigers’ captain James Hamblin and Oil Kings rookie Vladimir Alistrov. Joining Kral from the Chiefs was overage forward Riley Woods.

"This camp is a lot of fun. Anytime you get the chance to work with the goalie coaches here and reconnect with some goalies you don’t see very often during the season, it’s good."

A redirect to pick up the game's first goal. pic.twitter.com/uVLdBua6kB