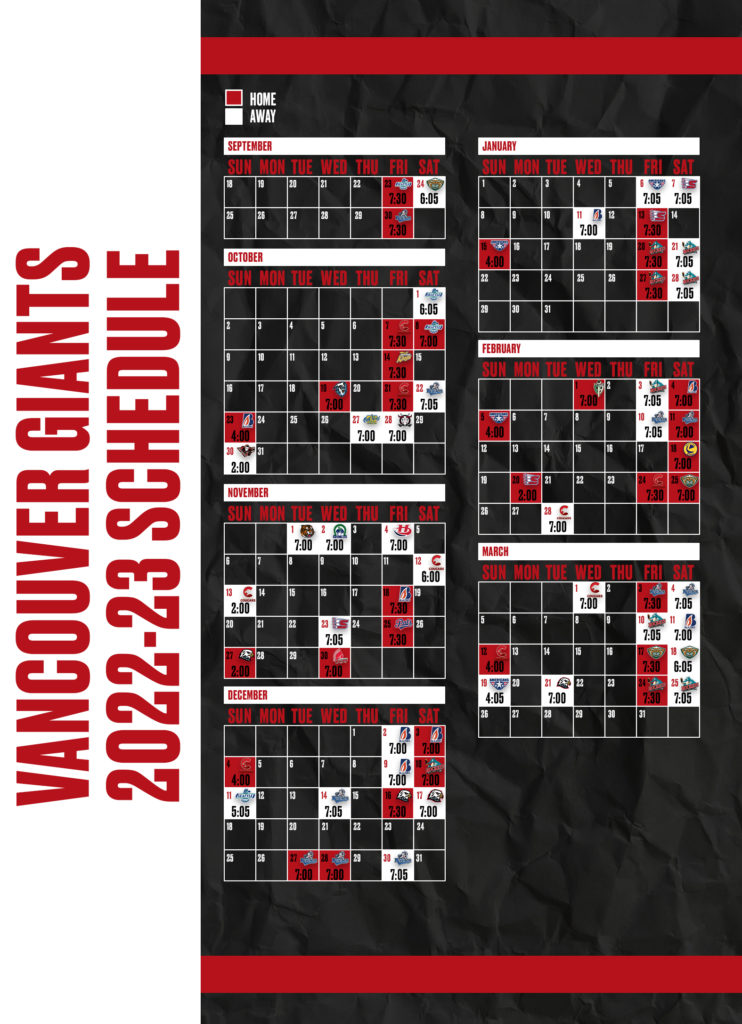 Vancouver, B.C. – The Vancouver Giants in conjunction with the Western Hockey League are pleased to unveil their entire 2022-23 68-game regular season schedule which begins Friday, September 23rd at the Langley Events Centre and wraps up March 25, 2023 in Kelowna.

The G-Men kick off their 22nd season in the Western Hockey League on Friday, September 23rd at 7:30 PM at home against the reigning Western Conference playoff champions, the Seattle Thunderbirds.

All eyes will be on the LEC on Friday, November 25th when the ‘exceptional’ 2023 NHL Draft prospect Connor Bedard and the Regina Pats come to town for their first visit to Vancouver since 2018. This season will also mark the first time that the Giants will have played host to the Winnipeg ICE (Wednesday, October 19th) since they relocated East from Cranbrook in 2019.

Other schedule highlights include:

–       A 2019 league championship rematch with the Prince Albert Raiders on Wednesday, February 1st, 2023 – The first visit to Vancouver for Prince Albert since Game 5 of the 2019 WHL Championship Final.

From October 27th through November 18th, the Vancouver Giants embark on their Central Division road trip, taking them through Edmonton, Red Deer, Calgary, Medicine Hat, Swift Current and Lethbridge, before finishing up the swing in Prince George. The 2022 World-Under-17 Hockey Challenge which will be taking over the LEC during that period.

Further details regarding tickets and promotional dates will be released in the weeks to come. Click here for more information on how you can become a Vancouver Giants season ticket holder for the 2022-23 season.