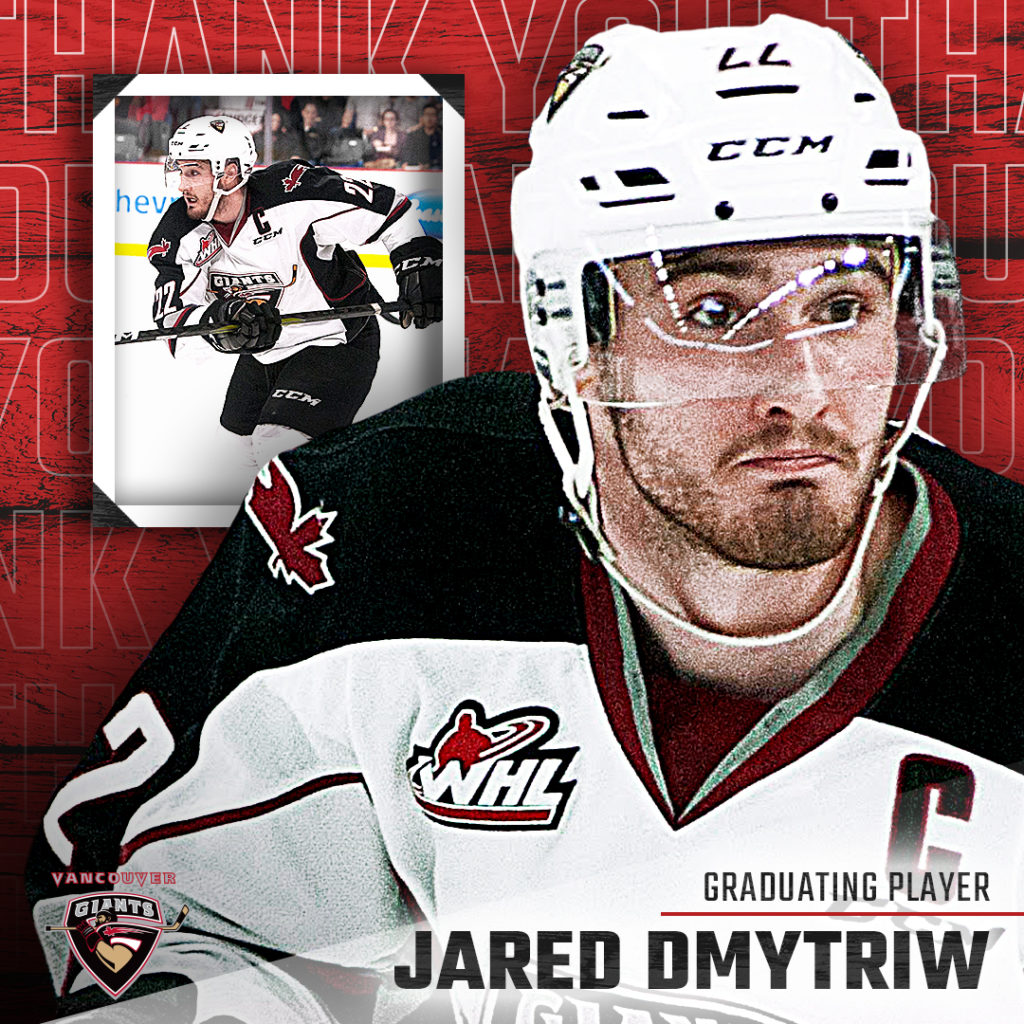 On November 28, 2017 the Vancouver Giants made one of their most important trades in recent memory. That day the Giants dealt a third round draft pick to the Red Deer Rebels in exchange for Jared Dmytriw. At the time the Giants were looking for a right-handed winger who could kill penalties and bring an element of speed to their lineup. Familiarity with Dmytriw was hardly a concern as the Giants had seen him 25 times since the start 2014-15 season as a member of the Victoria Royals. The move back West was a welcomed one for Dmytriw. For whatever reason, things weren’t clicking in Red Deer and the product of Craven, SK was excited about the opportunity to come back to the B.C. Division. He didn’t know it at the time, but he was about to enter one of the WHL’s top rivalries between the Vancouver Giants and the Victoria Royals, only this time he would play a huge role on the OTHER side.

In 45 regular season games with Vancouver during the 2017-18 season, Dmytriw managed nine goals and eight assists for 17 points. He came as advertised, supplying the Giants with speed, grit, timely scoring and perhaps most importantly, some experience on a team that had very little heading into the 2018 playoffs against Victoria. Dmytriw had two goals and an assist in seven games against his former club during the 2018 playoffs, but couldn’t watch in heartbreak as his former team held off the Giants in Game 7 to advance to Round 2. Rest assured though, Jared Dmytriw would get his vindication.

With a new General Manager and a new Head Coach in place to start the 2018-19 season, one of the first orders of business for the new regime was to determine their captain. It didn’t take long for Jared Dmytriw’s name to surface as the top candidate. From the first day of Training Camp on, Dmytriw led by example with his play, his actions and his words. The Giants made the announcement official on September 20th.

During his final season, Jared Dmytriw set a new career high with 38 points and finished with a +7 rating. He also arrived (and eventually surpassed) the 300 game mark in the WHL. Not only did he bring it every night on the ice, but he worked tirelessly in the community as well, often spearheading various community initiatives for the Giants to become involved in. He became the second Giant in as many seasons to receive Western Conference Humanitarian of the Year honours.

In the playoffs, he took his game to an even higher level. He had a flair for the dramatic, and always seemed to score when his team needed him the most, including this gem that came in Game 1 of Round 2 against an old nemesis, the Victoria Royals. Jared Dmytriw led all skaters with three goals and three assists in that series, leading his team to a four-game sweep of the same team that had ended their season a year ago:

In Round 3, Dmytriw’s heroics continued. In Game 2 he scored twice in a 23-second span in the third period, helping the Giants erase a 2-0 deficit in what would ultimately become a 4-2 victory. The Giants would defeat the Chiefs in five games, earning their third ever berth in the WHL championship series.

🎥: MADNESS!! Just like that the Gmen have the lead!! @JaredDmytriw 😭🙌🏼 pic.twitter.com/rOQcv0RkjO

In the 2019 Rogers WHL Championship series against Prince Albert. Dmytriw finished with two goals and six assists for eight points, finishiing tied for the team lead in scoring alongside Bowen Byram. He finished the playoffs with 21 points in 22 games, which tied him for second in team scoring.

Nobody competed harder. Nobody wanted it more. When he spoke, you listened and you knew that it was coming from a sincere place. The respect that he gained from his coaches, his teammates, the fans and even from opposing teams speaks volumes about the type of legacy that Jared Dmytriw has left in the WHL. His efforts have been instrumental in helping the Vancouver Giants return to prominence in the WHL and his many positive contributions to the Vancouver Giants will continue to be felt as they forge ahead.

Unbelievable how fast the last 5 years have flown by. So proud of the group that I had the pleasure of playing my final season with, and how close we came to our goal. I’m thankful to… https://t.co/tkHrTHmw5k

Thank you Jared for everything. We can’t wait to see what the future holds for you both in hockey and in life.