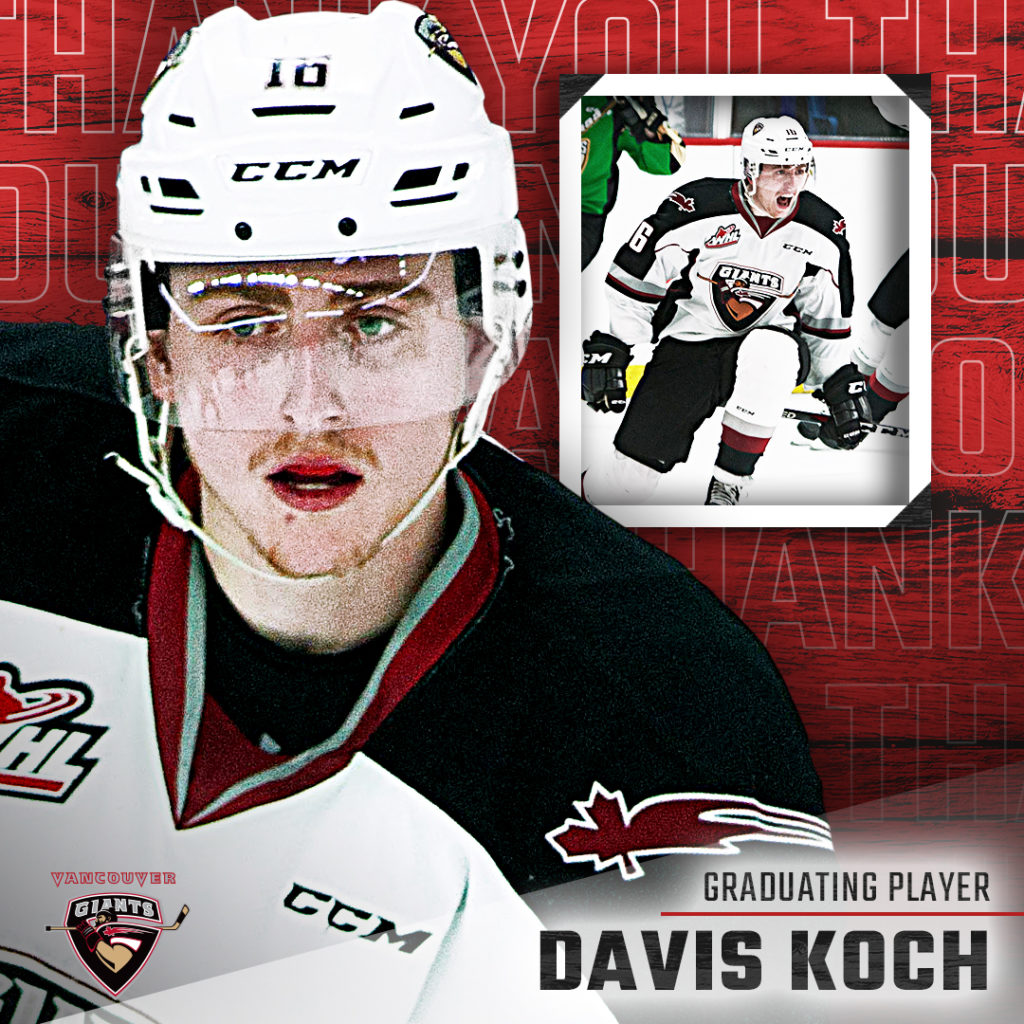 On January 10, 2018 the Vancouver Giants completed one of their most important trades in recent memory when they snagged talented forward/local product Davis Koch from the Edmonton Oil Kings. On the surface it was a savvy move for both sides. The Edmonton Oil Kings (who were rebuilding at the time) got younger pieces for their future, while the Giants added a skilled local forward who would play a huge part in their success for the next season and a half. Admittedly, it took Koch awhile to get adjusted to live with his new team, but by the time the 2018 playoffs rolled around, he found his groove and never looked back. Paired with Tyler Benson and Dawson Holt, Koch notched a pair of goals and three assists for five points in seven games, setting the table for what would be a most memorable final WHL campaign.

In 2018-19, Davis Koch played in all but one of the Giants 68 games. He managed to lead the team outright with 78 points, 50 assists, and 31 power play points. He captured the Giants Bublé Ironman Award, and the Gordie Howe Top Scorer Award for the Giants as they captured the top record in both the B.C. Division and the Western Conference. Koch was named WHL Player of the Month for March. The success continued for Koch in the playoffs as he finished with five goals and 16 assists for 21 points in 22 games as the Giants made their way to overtime in Game 7 of the Rogers WHL Championship Final.

Davis Koch’s entire WHL career was a memorable one. In 320 career regular season games with Edmonton and Vancouver, he finished with 255 career points. He was consistent, durable and his easy-going, inclusive attitude made him a huge favourite and a ‘glue-guy’ within the Giants locker room. As one of three 20-year-olds this season, Koch took it upon himself to make sure that everybody was included in team activities. He instigated many team dinners and functions and played a huge role in establishing the wonderful team chemistry that so many of the 2018-19 players raved about.

Whether it’s pro hockey, university hockey or something completely different altogether, Davis Koch will be an asset to any organization that he becomes associated with. When he was acquired by the Giants he called it a “Dream Come True” to play his remaining years of junior in front of friends and family. It’s safe to say that from January 10th, 2018 onwards the Vancouver Giants have been changed for the better thanks to the dedication and first-class demeanour of Davis Koch.

“To have played the last season and a half in Vancouver was a dream come true.” – @DKoch17

Thank you so much Davis for all you have done for the Vancouver Giants! A wonderful @TheWHL career indeed! pic.twitter.com/go9aHiRVu3