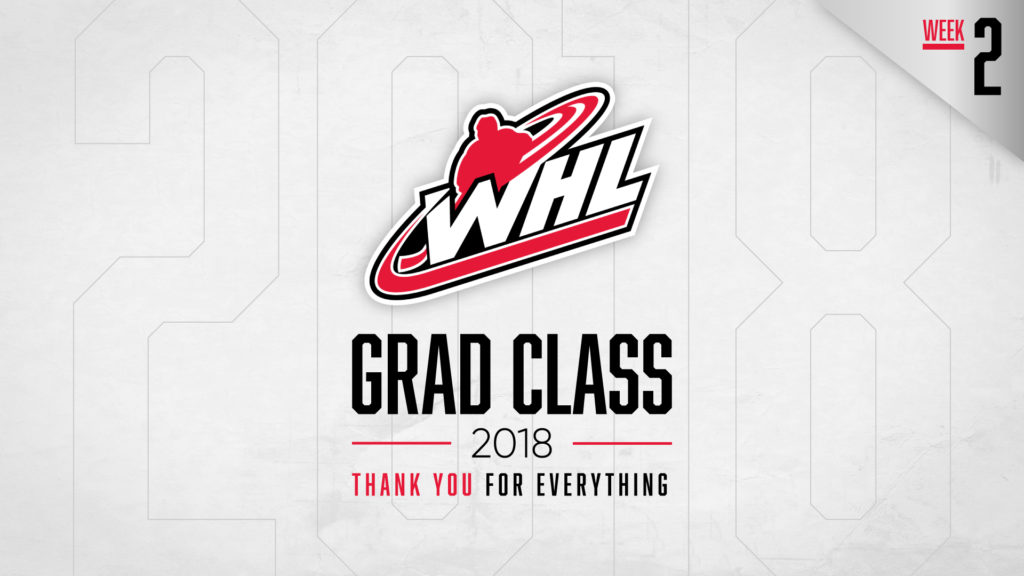 Through the months of July and August, the Western Hockey League is saying ‘thank you’ to its 2018 graduating class. From July 9 to 13, we extended our gratitude to 10 players who concluded their WHL careers in the 2017-18 season.

Prince George alternate captain Jared Bethune set career highs with 48 assists and 69 points in 71 games. After his WHL season he joined the Allen Americans of the ECHL where he recorded five assists in nine games. He finishes his WHL career with 175 points in 276 games and has committed to the Queen’s Golden Gaels at Queen’s University.

Congrats to @bethune_21 on his WHL career with the @PGCougars. After scoring 179 points Jared has committed to the @queensgaels. Best of luck Jared! #WHLAlumni 🏒🎓 pic.twitter.com/aIOdqUwcul

Seattle Thunderbirds defenceman Austin Strand doubled his offensive output this season, scoring 64 points in 69 games and earning himself a contract with the L.A. Kings. Additionally, Strand won the Ed Chynoweth cup in 2016-17, starting the rush that lead to the game winning goal in overtime in game six of the final.

Congrats @strander717 on his WHL career. After scoring 64 points in 69 games this season Austin has signed with the @LAKings of the @NHL. Best of luck! #WHLAlumni 🏒🎓 pic.twitter.com/rAB56wmGR9

Regina Pats alternate captain Matt Bradley put up 37 goals and 42 assists for 79 points this season, finishing his WHL career with 247 points in 281 games. He attended the Toronto Maple Leafs Development Camp and has signed a contract with Toronto Marlies in the AHL.

Congrats to @Matt_Brad37 on his excellent WHL career. Bradley scored 261 points in 326 games. He has since signed with the @TorontoMarlies. We wish you the best! #WHLAlumni 🏒🎓 pic.twitter.com/i6jfRFVHrU

Lethbridge Hurricanes goaltender Logan Flodell played 161 games in the WHL. The two-time All-Star finished with a career 2.92 GAA and a .908 SV%. Flodell was a two-time WHL Goaltender of the Week this season and was the runner up for WHL Goaltender of the Year. Flodell has committed to the Acadia Axemen at the University of Wolfville, Nova Scotia.

Congrats to @loganflodell on his excellent WHL career. Logan was a two-time WHL Eastern Conference All Star and has committed to @axemenhockey. Best of luck! #WHLAlumni pic.twitter.com/jldo2Hq2n4

Spokane Chiefs defenceman Tyson Helgesen matched his offensive output from last season with 29 points. He was a plus-minus 19 this season and played with the Hartford Wolf Pack following the conclusions of Spokane’s season. He has since committed to the Mount Royal University Cougars.

Congrats Tyson Helgesen on a great WHL career with the @spokanechiefs. Helgesen will be pursuing post-secondary, playing for the @MRUmhockey. Best of luck! #WHLAlumni 🏒🎓 pic.twitter.com/JNDtrhEvBl

Vancouver Giants defenceman Brennan Riddle split this season between Vancouver and Lethbridge. He was an effective shut down defenceman, playing 275 games in the WHL. He has committed to the University of Regina Cougars for the 2018-19 season.

Congrats to @Ridsy27 on his WHL career. Riddle played 275 games in a shut-down defensive role. His career will continue with the @ReginaCougars. Best of luck in the future! #WHLAlumni 🏒🎓 pic.twitter.com/g9Ln2ncKXA

Medicine Hat Tigers forward Mark Rassell scored 50 goals this season, adding 39 assists for 80 points in 72 games. Rassell was the captain of the Tigers and has committed to the Varsity Reds at the University of New Brunswick.

Saskatoon Blades goaltender Tyler Brown, who spent most of his career with the Regina Pats, was an exceptional playoff goaltender, recording a 2.61 GAA and a .915 SV% in 35 playoff games.

Congrats @tyler_brown31 on a successful WHL career, posting an impressive 2.61 GAA and .915 SV% in 35 career playoff appearances. Best of luck in the future! #WHLAlumni 🏒🎓 pic.twitter.com/fiE9tJxMkg

Victoria Royals defenceman Chaz Reddekopp spent five seasons with the Royals serving as their alternate captain for the last two. With 74 points (17G-57A) in his last two seasons, he signed a contract with the L.A. Kings, who drafted him in the seventh-round in 2015.

Congrats at @C_Redds for a great WHL career with @victoriaroyals. Chaz put up 146 points, earning him a contract with the @LAKings. Good luck Chaz! #WHLAlumni 🏒🎓 pic.twitter.com/0EZHasyU4M

Tri-City Americans goaltender Patrick Dea finished his WHL career with 170 games played for Tri-City and Edmonton. His last season saw him post a 3.17 GAA and a .913 SV%. He has since committed to the University of British Columbia Thunderbirds.

Congrats @pdea01 on a successful WHL career. Posting a .913 SV% in his final season with @TCAmericans, Dea will be joining the @UBCMHKY. Best of luck Patrick! #WHLAlumni 🏒🎓 pic.twitter.com/oj2ycsDhIN

Thank you to our graduating players for all your contributions on and off the ice. Visit @TheWHL on Twitter daily for new player cards. Weekly recaps of player cards and highlights will appear at WHL.ca each Friday.