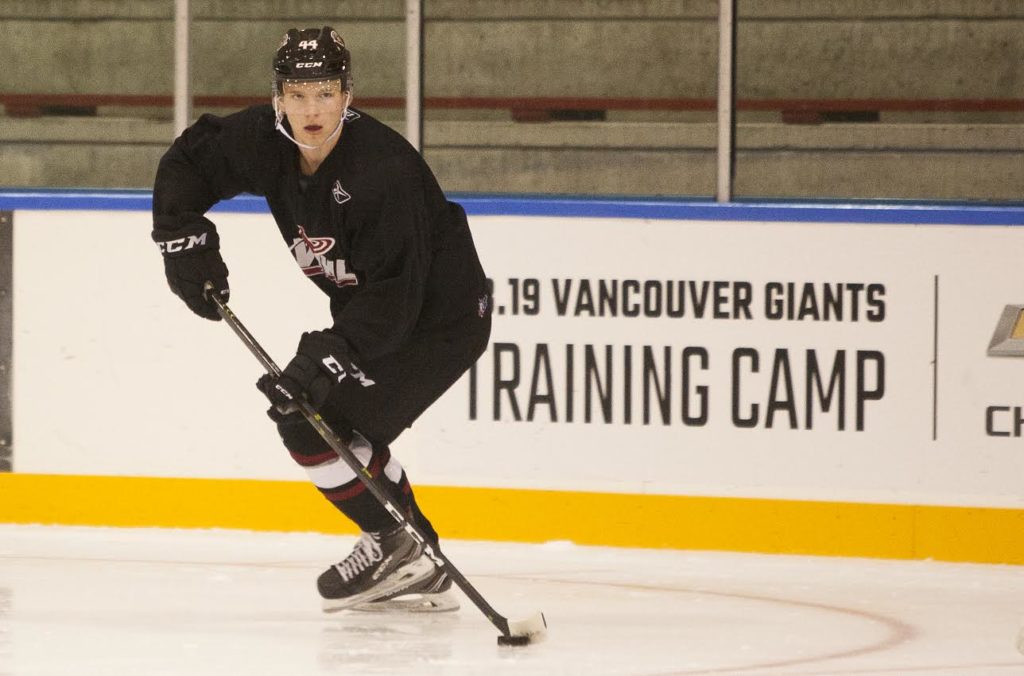 From the word “go” there was an increase in intensity during Day 3 of 2018 Chevrolet Vancouver Giants Training Camp in Ladner, B.C. Head Coach Michael Dyck made it very clear that he and Associate Coach Jamie Heward wanted the compete level to rival that of a regular WHL game and to a large degree the message was heard loud and clear.

The day started with a goalie session and an individual practice for all three teams (Team Lucic, Team Kane, Team Gallagher) before each team took the ice for two games later in the day. The veterans made a big statement offensively as Davis Koch (three goals for GREY), Jared Dmytriw (two goals for BLACK) and Matt Barberis (one goal for GREY) all chimed in offensively for their respective teams. Bowen Byram had a goal and an assist as well.

Between the pipes it was more of the same as both Braedy Euerby (Black) and Drew Sim (Grey) posted zeroes in one of their two games.

A full recap of Day 3 can be found below. Don’t forget that tomorrow morning the annual Legends Cup game will take place beginning at 9:00 AM at the Ladner Leisure Centre. Admission is free and the game will showcase the young, up-and-coming talent for the Vancouver Giants.

1st Period – BLACK – Kyle Bochek finishes off a great rush from Aidan Barfoot who beat his defender wide before centering a pass to the slot. Bowen Byram grabs the second assist.

1st Period – BLACK – Jared Dmytriw nets his second of the weekend. Yannik Valenti grabbed the helper as he led the rush down the left-wing. Two goals for Black in less than five minutes to start the game.

1st Period – BLACK – Liam Bell buries a shot from the left point. Bowen Byram made a spin move along the right wing boards to elude his defender before setting up Bell for the one-timer.

Shots 9-7 after one. Clean sheet for Braedy Euerby (9 saves).

2nd Period – WHITE – Justin Sourdif buries his third of the weekend. He picked off a clearing pass in the Black zone and wasted no time.

Jake Kovinsky and Trent Miner combined for 10/14 saves for White.

Jack Ford and Braedy Euerby combined for 14/15 saves for Black.

1st Period – GREY – Davis Koch bats an Evan Patrician pass out of the air and by Trent Miner.

1st Period – GREY – Late in the first period Krz Plummer gets his stick on a loose puck in front of the net and whacks it past Miner for his fourth of the weekend.

2nd Period – GREY – Davis Koch from Evan Patrician for the second time in the game.

2nd period – GREY – Matthew Peterson gets his second goal in as many games. Dylan Plouffe with the helper.

2nd Period – GREY – Davis Koch nets his third of the game. Dawson Holt with the assist.

Drew Sim with his third clean sheet in a row.

Jake Kovinsky and Trent Miner combined for 13/20 saves for White.

1st Period  BLACK – Jared Dmytriw from Svejkovsky and Valenti. The first goal of the weekend that’s gotten past Drew Sim.

1st Period – BLACK – Jared Dmytriw finishes off his second of the period and fourth of the weekend. A beautiful backhand that snuck past Sim. Yannik Valenti  gets the helper.

1st Period – BLACK – Right as time is about to expire in the first, Bowen Byram makes a great move to the middle and goes upstairs and in. Brayden Watts with the assist.

Shots 11-9 after one favoring Black.

2nd Period – GREY – Matt Barberis spins into the slot and fires home his first of the weekend.

2nd Period – GREY – Alec Saretzsky ties the game! With under a minute remaining in the game he nets his second.

OH MY KOCH –  20-year-old Davis Koch struck three times in one game for Team Grey in a 7-1 win over Team White. Koch added an assist in his second game to finish the day with four points.

THE ROOKIE AND THE VET – 16-year-old Krz Plummer and 20-year-old Jared Dmytriw finished the weekend tied for the lead in goals. Both potted four for Team Grey.

SOLVING SIM – It took until his fourth appearance but rookie goaltender Drew Sim eventually surrendered his first goal of the weekend. The culprit: Jared Dmytriw.

“Knowing the league, knowing the players – I’m coming into this season with a lot more confidence.” – @AidanBarfoot

“Expectations are high. They want us to be strong right out of the gate.” – @KalebBulych

Another practice for Team Kane is in the books. Games will get going today beginning at 3:30 PM in the LLC. pic.twitter.com/8BxouCGPTx

“It’s good to be here. I’m happy to be a part of the Vancouver Giants organization.” – Yannik Valenti.

“It’s special to play with these younger guys. It reminds me of my experience last year.” – @NHLFlames prospect Milos Roman on Day 3 of @chevrolet Giants Training Camp. pic.twitter.com/X5hOmMJg6c