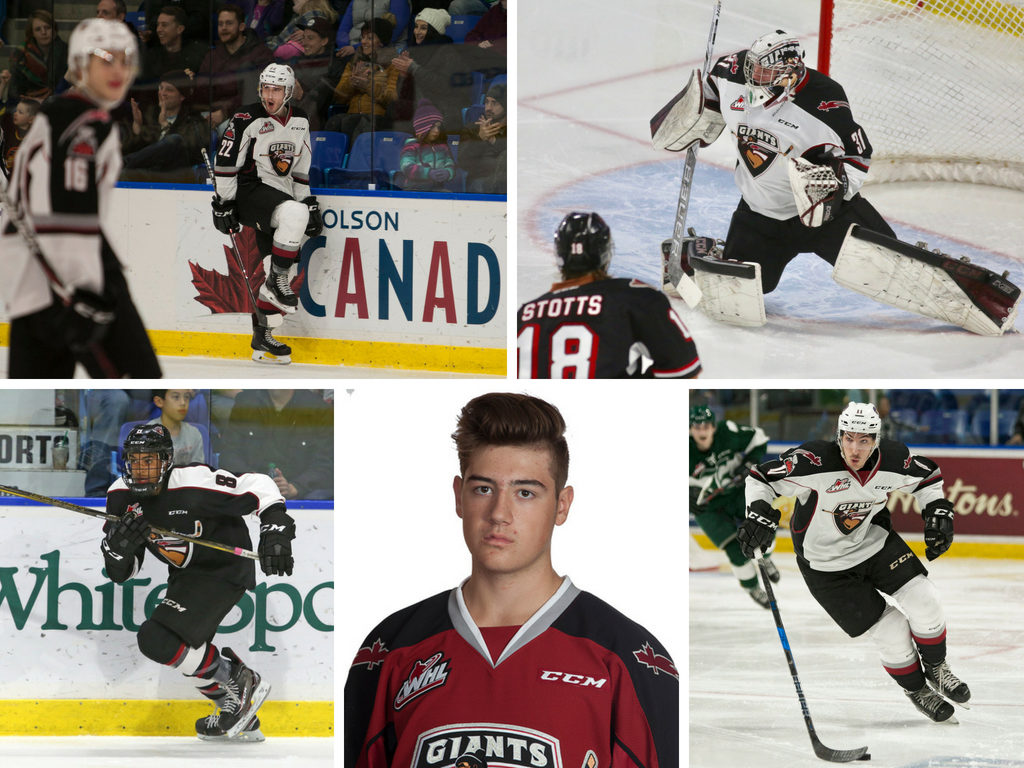 Day 2 of Chevrolet Vancouver Giants Training Camp was jam-packed. The morning consisted of a Goalie Session followed by three 45-minute practices – One for each of the three teams (Kane, Gallagher and Lucic). Prior to the evening scrimmages the team held an outdoor barbecue/mixer outside the Ladner Leisure Centre where players, fans, staff and families enjoyed some White Spot burgers and some sunshine. General Manager Barclay Parneta then welcomed the crowd, introduced the staff and set the tone for the evening ahead.

The future of the Giants was brightly on display Friday as 2002-born forwards Krz Plummer (three goals for Black) and Justin Sourdif (two goals for White) did their part offensively while 2001-born forward Lukas Svejkovsky and 2000-born import forward Yannik Valenti looked right at home alongside veteran 20-year-old Jared Dmytriw. The trio combined for four goals and seven points for two games with Team Black. Between the pipes all four signed goaltenders: David Tendeck, Trent Miner, Braedy Euerby and Drew Sim showed well with Drew Sim earning a clean sheet in both of his appearances.

A full recap of game scores, notes, videos, audio interviews and much more are available below.

1st Period – GREY – Krz Plummer from Tyler Ho off a two-on-one rush. Ho forced the turnover and fed Plummer along the right wing. Plummer then one-timed it past Jake Kovinsky.

1st Period – GREY – Brenden Pentecost with a bomb from the left point off a failed clear. Unassisted goal.

1st Period – WHITE – With 10 seconds left in the first period Justin Sourdif skates down the right-wing and rips a shot past David Tendeck.

David Tendeck and Drew Sim combined for 15/16 saves for Grey.

Jake Kovinsky and Trent Miner combined for 25/27 saves for White.

1st Period – BLACK – Hunor Torzsok unassisted with a great move to the backhand as he won the puck free in the corner, and used his size to create room for himself.

2nd Period – BLACK – Bowen Byram scores off his penalty shot rebound. Goal comes with under three minutes to go on the game.

Jake Kovinsky and Trent Miner combined for 14/19 saves for White.

Jack Ford and Braedy Euerby combined for 21/22 saves for Black.

1st Period – GREY – Krz Plummer from Kian Calder. Plummer took a pass in the high slot and ripped it home for his second of the day.

2nd Period – GREY – Evan Patrician does it all himself. Steals the puck at center, goes in on a breakaway and buries his first of the weekend.

2nd Period – BLACK – Lukas Svejkovsky tips home a point shot from Nicco Camazzola to get Black on the board with just north of nine minutes to go in the game.

Drew Sim and David Tendeck combined for 15/16 saves for Grey.

Jack Ford and Braedy Euerby combined for 23 saves for Black.

CLEAN SHEET – Goaltender Drew Sim (Rnd 3, 2018) is the youngest of six goalies at Giants Training Camp. He did not allow a single puck past him in either of his two appearances for Team Grey.

“Everybody’s pushing things just a little bit harder. That should speak for itself when you watch us out there,” – @Barbs_27

“I’m just trying to learn all I can about what it takes to play in @TheWHL” – @Drew31Sim pic.twitter.com/sKfznLJbLn

The first goal of 2018 @chevrolet Vancouver Giants Training Camp came via @KrzPlummer. The 2002 signed draft pick has trained hard this summer and is here to make this team. 🚨 pic.twitter.com/Hx26WTOrZf

23/24 through two games? Not bad @MinerTrent! The Giants first round pick from 2016 was in fine form during Day 2 of @chevrolet Giants Training Camp. pic.twitter.com/zt1naw773k

A goal and two assists from @lukassve10 today for Team Lucic during Day 2 of @chevrolet Giants Training Camp. pic.twitter.com/cLbEkGnBno