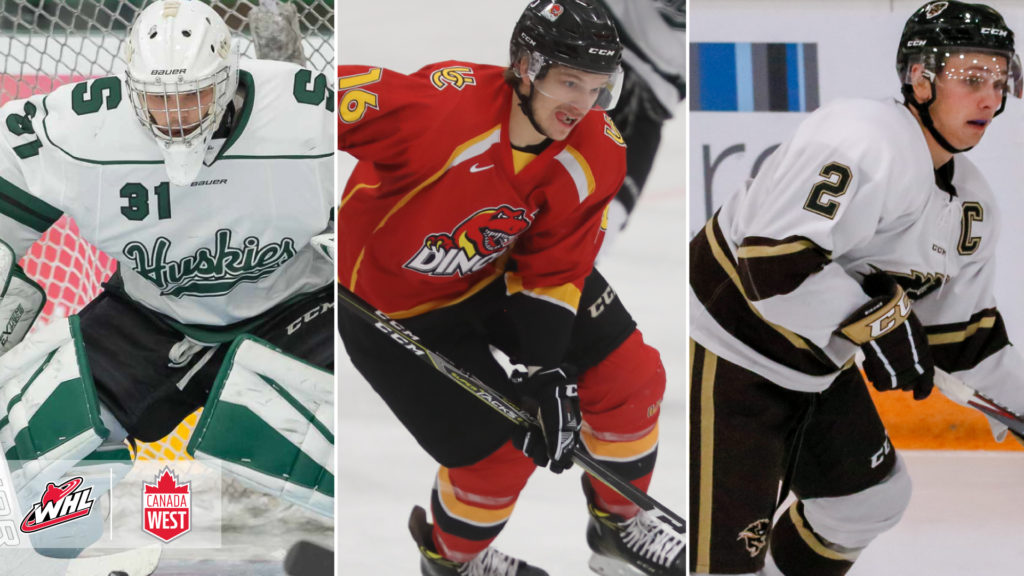 Of the 18 players honoured ahead of this weekend’s semifinal series, 16 are graduates of the WHL, highlighting the important role the WHL plays in providing the majority of CW men’s hockey talent.

The conference’s first all-star team was exclusively WHL grads, including goaltender Taran Kozun of the Saskatchewan Huskies and regular season scoring champion Matt Alfaro of the Calgary Dinos. The pair combined to play nearly 400 WHL regular season games over their junior careers, and will face off this weekend in Saskatoon when the Huskies host the Dinos in a best-of-three semifinal.

In the other conference semi, the Alberta Golden Bears and their five combined all-stars and all-rookies host the UBC Thunderbirds, who are fresh off an upset of Mount Royal in the conference quarters.

Both semifinals go Friday and Saturday (Sunday if necessary), with puck drop at 7 p.m. local for all games. You can watch every game on the road to the CW Final by tuning into Canada West TV Presented by Co-op.

About Canada West
Since 1972, Canada West (CW) has been a leader in Canadian university sport, working to provide our student-athletes the opportunities to excel in sport, the classroom, and their communities. CW and our 17 members from across British Columbia, Alberta, Saskatchewan, and Manitoba collectively carry on a legacy of competitive excellence, as our champions proudly go on to represent the conference at U SPORTS national championships.