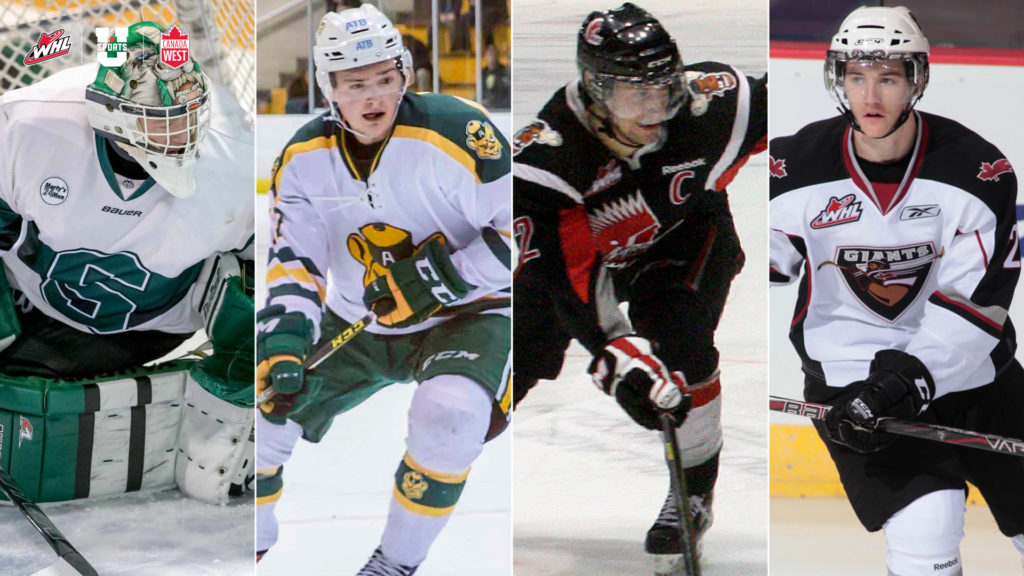 The Western Hockey League will be represented by 11 alumni on the U SPORTS All-Star Team set to face Canada’s National Junior Team prospects in a two-game set prior to the 2018 IIHF World Junior Championship.

U Sports announced the 23-player roster Monday morning. Representing the WHL will be 10 players and one coach, including goaltender Jordon Cooke (Saskatchewan) and defenceman Kendall McFaull (Saskatchewan), the only two WHL alumni to return from last year’s group of players. Cooke is also just one of two players returning from the 2015 edition of the roster.

The games are set for Wednesday, Dec. 13 at 7 p.m. ET / 4 p.m. PT and Thursday, Dec. 14 at 4 p.m. ET / 1 p.m. PT at the Meridian Centre in St. Catharines, Ont., home of the OHL’s Niagara Ice Dogs.  The games will mark the culmination of a four-day camp for the U SPORTS Men’s Hockey All-Stars beginning Dec. 11, while also serving as part of Hockey Canada’s National Junior Team selection camp for the 2018 IIHF World Junior Championship slated for Dec. 26 -Jan. 5 in Buffalo, N.Y.

“We’re thrilled to partner with Hockey Canada for what should be two very entertaining hockey games, and a continued partnership between our organizations,” said Graham Brown, President and CEO of U SPORTS. “We all know how excited Canadians get every December about Canada’s National Junior Team. These games will provide great exposure for U SPORTS men’s hockey, and I know our players and coaches are looking forward to shining on a national stage.”

Cooke, a product of Leduc, Alta., is in his fourth season with the Saskatchewan Huskies after a four-year WHL career with the Kelowna Rockets (2010-11 to 2013-14). The 24-year-old goaltender sits second in U SPORTS with 11 wins on the season.

Returning defenceman Kendall McFaull leads a contingent of four WHL Alumni on the blue line. The 25-year-old Rosetown, Sask. product played four seasons with the Moose Jaw Warriors (2009-10 to 2012-13), serving as captain in his final year. McFaull is in his fifth year with the Huskies program.

Dylan Busenius, who played with the Medicine Hat Tigers, Prince Albert Raiders and Saskatoon Blades during a  WHL career (2008-09 to 2013-14), will also line up on the U SPORTS’ blue line in the games. The 24-year-old Sherwood Park, Alta. product is in his fourth season with the Dinos.

Jason Fram, who played five season with the Spokane Chiefs (2011-12 to 2015-16), captaining the team during his final year. Now, the 22-year-old Vancouver,  B.C. product is in his second year with the Golden Bears. Fram is tied for sixth among scoring for U SPORTS defencemen.

The fourth and final defenceman named to the team with WHL experience was former Kootenay ICE blue liner Jagger Dirk, who was with the WHL club for five seasons (2009-10 to 2013-14). The 24-year-old Penticton, B.C. native is currently in his fourth season with the St. Francis Xavier University X-Men in Antigonish, N.S.

Cain Franson, who spent four seasons with the Vancouver Giants (2010-11 to 2013-14) will also join the blue line of Team U SPORTS. Now, the 24-year-old Sicamous, B.C. product is in his fourth year with the University of Calgary Dinos, leading the team in scoring with 14 points (7G-7A) in 16 games.

Boston Leier, who played his WHL career (2009-10 to 2013-14) with the Medicine Hat Tigers and later the Regina Pats, is leading this year’s group of standout forwards. The Saskatoon, Sask. product is in his fourth year with the Acadia Axemen and presently sits third in U SPORTS scoring with 30 points (11G-19A) in 11 games.

Logan McVeigh is another standout forward who came from the WHL ranks to the U SPORTS All-Star team. McVeigh played his five-year WHL career (2010-11 to 2014-15) with the Kamloops Blazers, Prince Albert Raiders, Medicine Hat Tigers and Regina Pats. Now in his third year with the University of Saskatchewan Huskies, the Kenaston, Sask. product sits tied for third in Canada West scoring with 21 points (6G-15A) in 16 games.

Luke Philp is another strong addition to the U SPORTS All-Star squad. The Canada West WHL Graduate of the Month for October has been a big part of Alberta’s early success, with him sitting second in Canada West scoring with 25 points (7G-18A) in 16 games. Philp, a product of Canmore, Alta., played his WHL career with the Kootenay ICE and Red Deer Rebels (2011-12 to 2015-16).

Cole Sanford rounds out the list of WHL graduates as the former Medicine Hat Tigers and Regina Pats forward (2012-13 to 2015-16) will be one of three Golden Bears to partake in this year’s games. Now in his first full season with the University of Alberta, the Vernon, B.C. product is tied for seventh in scoring with 12 points (6G-6A) in 16 games.

Former Seattle Thunderbirds defenceman Mark Howell (Calgary) will be behind the bench for second straight year as an assistant coach.

U Sports is the national brand for University Sports in Canada. Every year, over 12,000 student-athletes and 500 coaches from 56 universities vie for 21 national championships in 12 different sports. U Sports also provides higher performance international opportunities for Canadian student-athletes at Winter and Summer Universiades, as well as numerous world university championships. For further information, visit usports.ca.