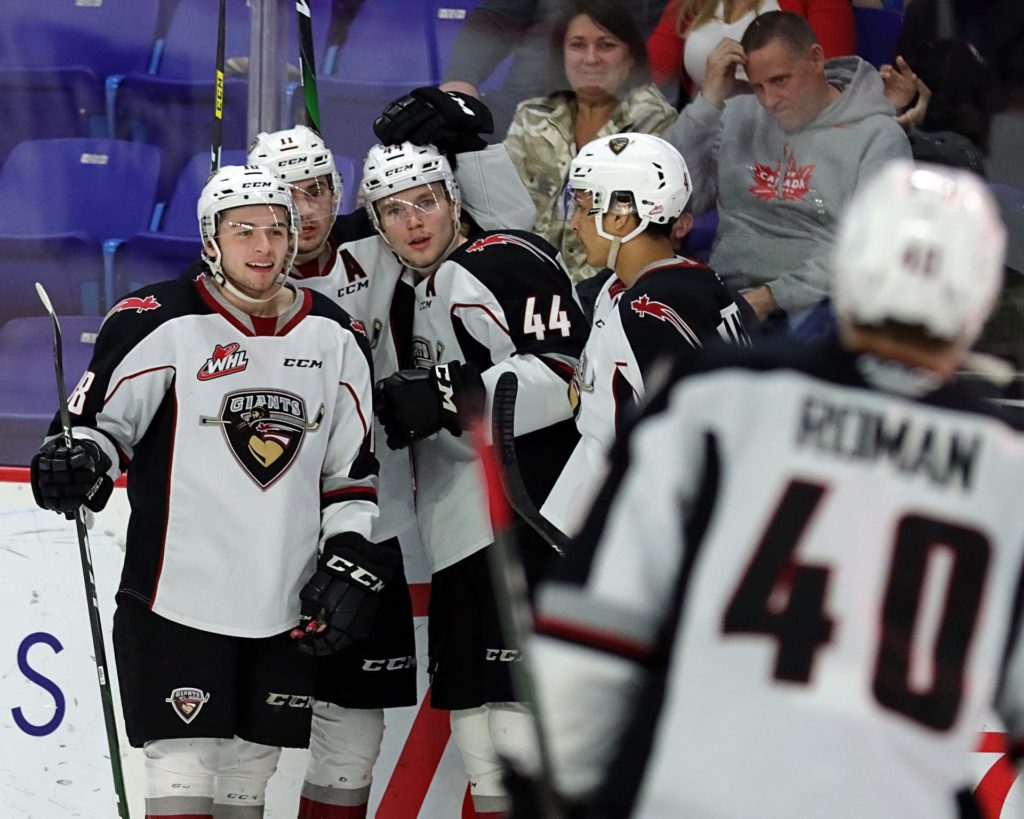 Over the next two weeks, we will revisit all 11 wins during the Vancouver Giants record-matching 11-game regular season winning streak. The streak started on Sunday, January 26th in Kelowna and unfortunately came to an end on Saturday, February 22nd in Everett. Over the course of the streak there were a number of thrilling moments which all helped lead the Giants back into what would end up being a top-two spot in the B.C. Division regular season standings. Today’s journey takes us to the Langley Events Centre for a wild Friday night showdown with the Calgary Hitmen.

THE TALK OF THE TOWN:

The Vancouver Giants (29-20-3-2) had won 10 straight games and were now knocking on the door of a top two spot in the B.C. Division standings. Keep in mind that back on January 26th the Vancouver Giants were six points back Kelowna for third, and now the G-Men were just a single point back of second. Fresh off a 3-2 win at home on Monday afternoon the Giants were starting to become the subject of positive ‘water cooler’ conversation again, and the local media took notice:

A win for the Giants would match their longest ever regular season winning streak which they set during the 2008-09 season. But it wouldn’t come easy. The Calgary Hitmen were an impressive 32-18-4-1 and were 7-3 in their last 10 games. They also boasted a pair of Vancouver Canuck prospects in Jett Woo and Carson Focht who were no doubt excited to showcase their skills in front of Vancouver hockey fans. A Friday night. A frenzied crowd. A chance to make some history. This game would ABSOLUTELY live up to the billing.

Here’s Michael Dyck with Dan O’Connor ahead of puck drop preaching the importance of a ‘team’ game and feeding off the energy of the crowd:

CGY – Mark Kastelic tipped home a Jett Woo point-shot for his 33rd goal of the season at 7:29.

VAN – Eric Florchuk (20) buried a shot from the right-wing off the rush to put the Giants on the board.

VAN – 34 seconds later Justin Sourdif (22) converted off a cross-ice feed from Bowen Byram to move Vancouver within a goal.

CGY – Luke Prokop followed up a Riley Stotts rebound and knocked home his second of the night at 9:54 to make it a 4-2 lead for Calgary.

*Calgary’s Riley Fiddler-Schultz was stopped on a penalty shot by David Tendeck at 11:35 of the second period.

CGY – With 36 seconds left in the period, Orca Wiesblatt knocked a bouncing puck past David Tendeck in the slot to give Calgary the 5-2 cushion.

VAN – Bowen Byram (10) kicked off the Giants comeback bid at 4:47 off a shot from a tough angle along the left-wing that beat Jack McNaughton up high.

VAN – Sourdif then completed his hat-trick and the comeback for the Giants with a breakaway goal at 15:53. The Giants would not relinquish their 6-5 cushion despite a valiant pushback from the Hitmen in the late stages of the game.

Next Game: The Giants look for their 12th straight win on February 22nd when they head to Everett to face the Silvertips at 7:05 PM.