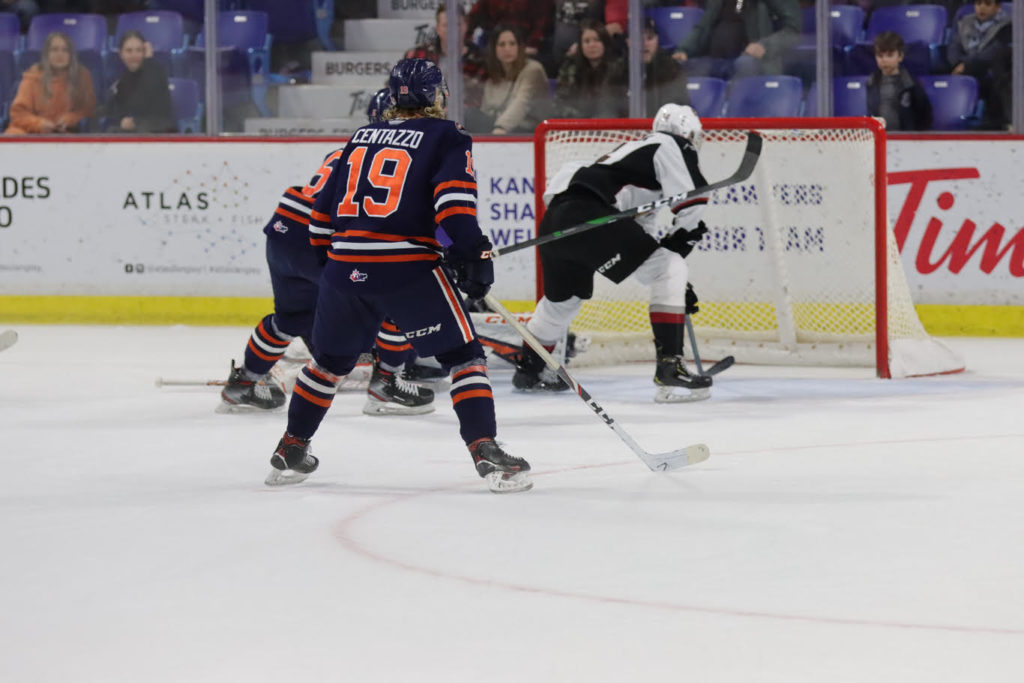 Over the next two weeks, we will revisit all 11 wins during the Vancouver Giants record-matching 11-game regular season winning streak. The streak started on Sunday, January 26th in Kelowna and unfortunately came to an end on Saturday, February 22nd in Everett. Over the course of the streak there were a number of thrilling moments which all helped lead the Giants back into what would end up being a top-two spot in the B.C. Division regular season standings. Today’s journey takes us to the Langley Events Centre for a Friday night showdown with the Kamloops Blazers.

A home-and-home weekend with the B.C. Division leading Kamloops Blazers was going to be a true litmus test for the post trade-deadline Vancouver Giants. Ahead of the January 31st showdown at the LEC, the Blazers were 4-0 on the season against Vancouver, and three of those four wins were dominant. But the chatter among the Giants heading into the weekend was about embracing the opportunity. The G-Men would also get a big boost with the return of both Trevor Longo (injury) and Tristen Nielsen (suspension). Giants head coach Michael Dyck echoed those sentiments with Dan O’Connor prior to puck drop:

Blazers goaltender Dylan Garand was sharp early. He stopped Michal Kvasnica on a breakaway, and then flat-out robbed Cole Shepard on a two-on-one power play rush with Justin Sourdif. Seconds after his stop off Shepard, the Blazers took a 1-0 lead when Josh Pillar struck on a shorthanded breakaway. Connor Zary made it 2-0 shortly thereafter on a power play. Despite outshooting the Blazers 12-8 in the first period, the Giants trailed 2-0.

The offensive floodgates opened up in a big way for the Giants in period two. Michal Kvasnica struck 56 seconds into the second on a power play.  Then Justin Sourdif scored a wonderful goal off the rush to tie the game 2-2. Milos Roman then put the Giants ahead 3-2 at 8:44 when he parked himself in front of the net and tipped home a Tristen Nielsen point shot. Bowen Byram then converted on a five-on-three power play to push the lead t0 4-2. The shots through two periods were 24-15 Vancouver and the score was 4-2. But you just knew that the division leaders weren’t going to fade quietly.

Kamloops outshot Vancouver 12-5 in the final period, and went to work trying to chip away at their two-goal deficit. Connor Zary bagged his 30th goal of the season on a power play at 4:17. Then Orrin Centazzo tucked a rebound home at 12:14 to tie the score. 60 minutes would ultimately not be enough to determine a winner on this night, and for a second time in five meetings, the Giants and Blazers were heading to overtime.

With under 30 seconds remaining in overtime, Eric Florchuk (16) picked up a Justin Sourdif pass in his own zone and sprinted up the ice wide down the left wing. Florchuk beat his defender wide, cut to the front of the net and slid a backhand deke past Dylan Garand, giving the Giants the 5-4 overtime victory.

Head Coach Michael Dyck spoke with the media after the spirited victory:

Then it was the OT hero Eric Florchuk’s turn:

Rumours of poor weather and highway closures were starting to surface prior to the start of Friday’s game. With a rematch looming Saturday in Kamloops,  the Blazers took to the rainy highway after the game. It was a slower trek home than usual, but the Blazers made it to Kamloops safely. The Giants wouldn’t be heading to Kamloops until the following morning.