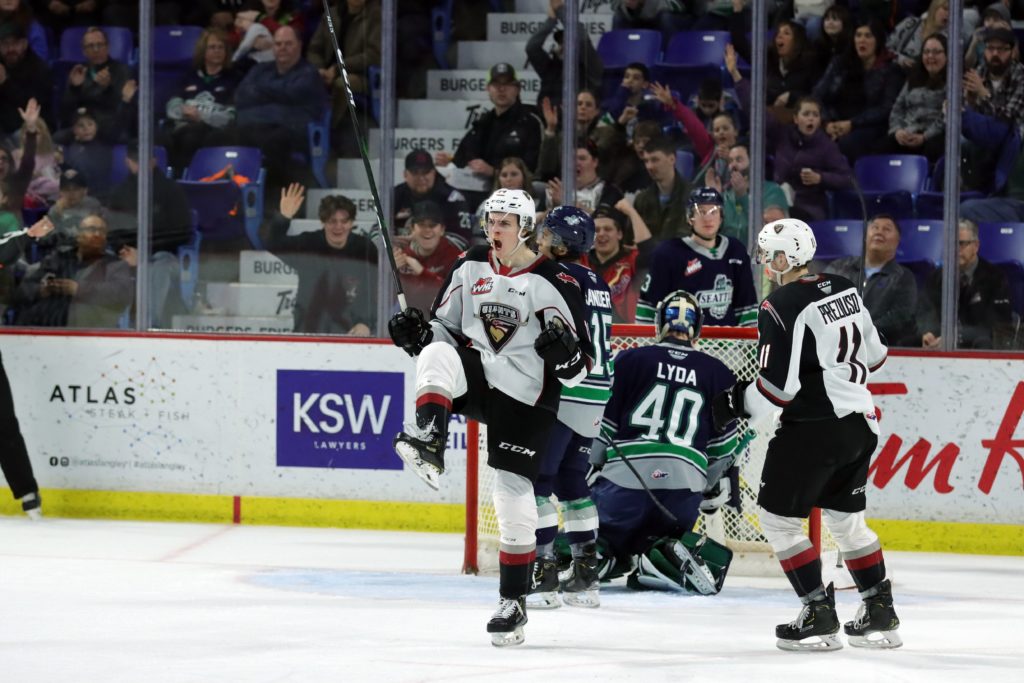 Over the next two weeks, we will revisit all 11 wins during the Vancouver Giants record-matching 11-game regular season winning streak. The streak started on Sunday, January 26th in Kelowna and unfortunately came to an end on Saturday, February 22nd in Everett. Over the course of the streak there were a number of thrilling moments which all helped lead the Giants back into what would end up being a top-two spot in the B.C. Division regular season standings. Today’s journey takes us to the Langley Events Centre and a Family Day matinee battle with the Seattle Thunderbirds.

The Vancouver Giants were becoming the talk of the WHL. Michael Dyck’s Giants had won nine straight games and were now knocking on the door of second place in the B.C. Division standings. Ahead of the February 17th afternoon tilt with Seattle the Giants were 28-20-3-2 and were just two points back of the Royals for a top-two spot in the Division. A win on Monday would match the longest winning of the season by any team in the WHL (Brandon had 10 wins), and would match the second longest regular season winning streak in the history of the Giants franchise.

In order to get there, the Giants would one again have to defeat a young Seattle Thunderbirds team (20-27-3-3) that had revenge on their minds after suffering a 6-2 loss at home against the Giants two nights earlier.

As he’d done the entire time, Michael Dyck downplayed the streak during his pre-game conversation with Dan O’Connor, and also spoke about his takeaways from the 6-2 victory from February 15th:

Giants captain Alex Kannok Leipert took some time before the game to chat about the Seattle Thunderbirds, Milos Roman’s Saturday hat-trick and more.

VAN – Bowen Byram (9) got the ball rolling offensively for the Giants at 13:13 with a power play goal. For Byram it extended his point streak to nine straight games, and his goal-streak to four games. Eric Florchuk and Milos Roman had the assists.

VAN – Tristen Nielsen (28) made it 2-0 on a power play goal at 17:06. For Nielsen, it marked the fifth straight game with a goal. Bowen Byram and Eric Florchuk both helped set it up.

SEA – Thunderbirds rookie Conner Roulette put Seattle on the board with his 17th of the season at 2:33. Roulette did well to shrug off a couple of Giants defenders before converting. Payton Mount had the lone assist.

VAN – Exactly seven minutes later at 9:33, Eric Florchuk padded the Giants lead to 3-1 when he knocked home a Michal Kvasnica pass from beside the Seattle goal. Tyler Preziuso earned the second assist on the play, giving Florchuk 19 goals on the season.

SEA – With 43 seconds left in the third, Simon Kubicek’s shot from the left point snuck through traffic and in, giving him seven goals on the season. Conner Roulette earned his second point of the game, with an assist.

Michael Dyck meets with the media after his team’s 10th straight win: