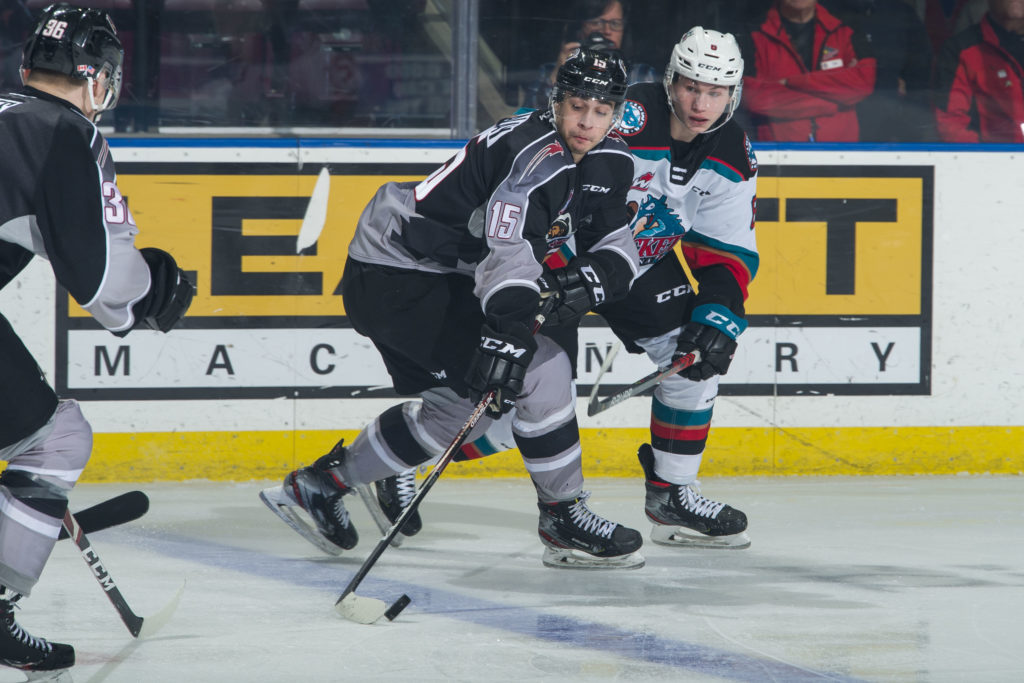 Over the next two weeks, we will revisit all 11 wins during the Vancouver Giants record-matching 11-game regular season winning streak. The streak started on Sunday, January 26th in Kelowna and unfortunately came to an end on Saturday, February 22nd in Everett. Over the course of the streak there were a number of thrilling moments which all helped lead the Giants back into what would end up being a top-two spot in the B.C. Division regular season standings. Today’s journey takes us to Kelowna, B.C. for the very beginning of the streak.

The Vancouver Giants Board the Bus:

The mood surrounding the Vancouver Giants on the morning of January 26th was somewhat sombre. One night prior the G-Men had dropped a 3-2 overtime decision at to the Kelowna Rockets, and started the day six points back of Kelowna for third place in the B.C. Division standings. Rookie forward Zack Ostapchuk was injured in the first period of the previous game and wouldn’t be able to join his teammates on the ice in Kelowna. Neither would leading scorer Tristen Nielsen who had been assessed a one-game suspension for an interference major at 18:03 of the third period of Saturday’s game. If the Giants were going to win in Kelowna, they were going to have to empty the tank with two fewer skaters than their opponent.

About an hour into the bus trip to Kelowna, word started to surface about a helicopter accident involving Kobe Bryant, which had many of the Giants checking their phones for the latest updates.

The Giants arrived at Prospera Place right around 3:00 PM, which was perfect for a 5:05 PM puck drop. The players rushed to unload the bus and get their dressing room ready, while Giants head coach Michael Dyck shared a brief conversation with Giants broadcaster Dan O’Connor:

Heading into action on January 26th the Vancouver Giants power play was 8/21 since the January 10th trade deadline. The Rockets took an early penalty and the G-Men made them pay just 2:31 into the game. With Tristen Nielsen suspended, Michal Kvasnica was tasked with playing the right-wing on the first power play unit. The Czech forward received a perfect cross-ice feed from Eric Florchuk and blasted the puck past Roman Basran to give the Giants the 1-0 lead. The Rockets outshot the Giant 13-5 in the first, but Vancouver skated into the tunnel with a 1-0 lead on Kvasnica’s second goal of the campaign.

Neither team found the back of the net in period two thanks to the stellar play of both David Tendeck and Roman Basran. David Tendeck made two highlight-reel saves off Alex Swetlikoff and Conner McDonald to keep his team up 1-0. Roman Basran’s best save of the second period came off Tyler Preziuso’s chance from the left-wing off the rush.

The Michal Kvasnica-Eric Florchuk duo would connect again in the third period off the rush. At 9:17, Kvasnica took a feed from Florchuk at the top of the right-wing circle and fired a shot through traffic and in for his second of the game and third of the season. Then at 14:55 Holden Katzalay provided some insurance for the Giants on a power play rebound to extend the lead to 3-0. Alex Swetlikoff would score 35 seconds later for the Rockets to break up David Tendeck’s shutout, but that would be as close as the home side would get.