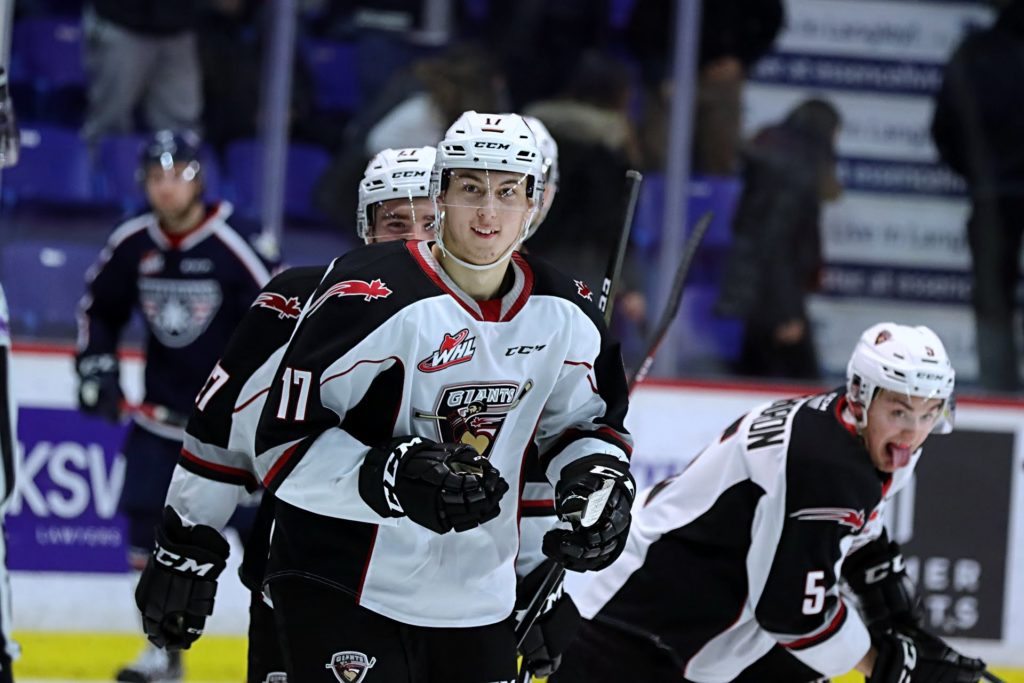 Over the next two weeks, we will revisit all 11 wins during the Vancouver Giants record-matching 11-game regular season winning streak. The streak started on Sunday, January 26th in Kelowna and unfortunately came to an end on Saturday, February 22nd in Everett. Over the course of the streak there were a number of thrilling moments which all helped lead the Giants back into what would end up being a top-two spot in the B.C. Division regular season standings. Today’s journey takes us to the Langley Events Centre for the first of a five-game home stand for the Giants. Their opponents: The Tri-City Americans.

Fresh off a spirited victory on Saturday, February 1st in Kamloops the Giants returned home for the start of what would ultimately become their longest home stand of the 2019-20 season. For the next two weeks the Giants would play five straight games at home beginning Tuesday night against the Tri-City Americans. The Ams entered the evening 2-8 in their last 10, but were coming off a road victory in Prince George. Steve Ewen of the Province spoke with Dan O’Connor ahead of Tuesday’s game, and spoke up of the importance for the G-Men to start their home stand strong:

A POINT TO PROVE FOR KADEN KOHLE:

Ahead of the January 10th trade deadline, the Vancouver Giants swung a deal with the Tri-City Americans, acquiring 2002-born forward Kaden Kohle in exchange for fellow 2002-born forward John Little. For both players, it was a fresh start, and Kohle appeared very comfortable in his new surroundings with the Giants. He spoke with Dan O’Connor ahead of his first meeting with his former team:

VAN – Bowen Byram (5) wired a shot home from the left-wing point with 1.7 seconds left on the clock to make it a 3-1 lead for Vancouver.

VAN – Tristen Nielsen (23) extended the lead to 4-1 off a shot from atop the left-wing circle.

VAN – At 8:13 of the third period, Kaden Kohle stuffed a backhand shot home on the power play to record his first WHL goal. 8-2.

VAN – Michal Kvasnica’s (6) second goal of the night came off the rush at 14:31, to help the Giants match their previous single-game high for goals. 11-4 was the score.

VAN – Seth Bafaro made it 12-4 Giants on a power play at 17:10, giving the Giants a new single-game record for goals.

Congratulations are in order for Kaden Kohle, who scored his first WHL goal tonight, against his former team no less!
•
•
•
📸: Rob Wilton pic.twitter.com/O8FELj7rS8

Next Game: On Saturday night at home against the Prince George Cougars at 7:00 PM.