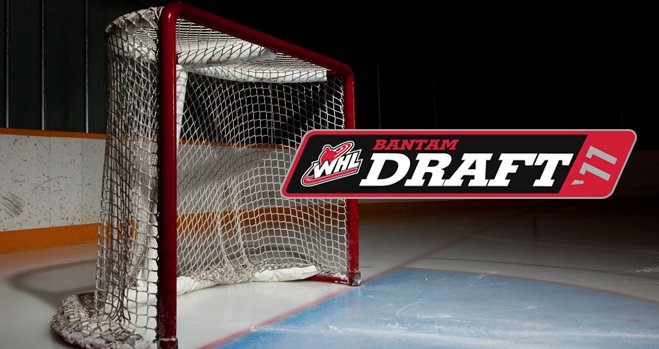 The 2011 WHL Bantam Draft is complete and the Vancouver Giants have added 9 new players to the fold. 5 defencemen, 3 forwards and 1 goaltender. In terms of where they are from it breaks down like this, 4 from British Columbia, 3 from Alberta, 1 from Saskatchewan, and 1 from Washington. For Director of Player Personnel Jason Ripplinger and his entire scouting staff, today is a culmination of all the hard work they put in throughout the hockey season, going to rinks all across Western Canada and the United States. “This was a very important draft for us,” said Ripplinger. “When you have 5 selections in the first 38 picks it is a huge opportunity to set up your franchise for years to come. We were able to address our biggest concern, that being size, as well as selecting guys who are competitive and hard to play against.”

With their 1st round selection, 20th overall, the Giants picked up centre Thomas Foster. The product of Slave Lake, AB has spent the past two seasons playing for the Spruce Grove Saints in Albera’s AAA Bantam league. This season he had 32 goals, 21 assists, 53 points, and 4 penalty minutes in 33 games. Ripplinger believes Foster addresses his team’s biggest need. “Thomas is a hard nosed player who is solid at both ends of the ice and tough to play against. With his speed, play making ability, and character we believe he has a bright future with the Giants organization.”

Foster is following in his older brother’s footsteps; T.J. was a second round selection of Edmonton in 2007 and just wrapped up his third season with the Oil Kings. “I am excited and eager for the opportunity to play and live in Vancouver, ” said Foster. “They have a great organization with an impressive history and I know one day I will get the opportunity to play there.”

The 2nd round was the busiest for Vancouver with 4 selections. They kicked things off by taking goaltender Payton Lee from Cranbrook, BC. He spent this past season playing for the Pursuit of Excellence program in Kelowna, BC. “We had him rated as the best goalie in the draft,” said Ripplinger. “He is poised, focused, and the type of goaltender that doesn’t get rattled. In all the games we saw him play in, he never gave up a soft goal.”

2 picks later the Giants took defenceman Jake Kohlhauser. The 6’0, 165 blueliner is a solid defensive defenseman. “He is big and strong and moves the puck well,” said Ripplinger. “He too is hard to play against, plus he has shown the ability to be a leader, being named captain of his Alberta Cup team.”

With the 35th pick overall Vancouver selected Abbotsford, BC product Ryan Simpson. At 6’2, 170 he is an imposing force. “Ryan is exactly the type of player we have been looking for in this year’s draft,” said Ripplinger. “He is big,physical, and will create room for the rest of his teammates. I believe he has the potential to be a solid second line player in the WHL.”

The Giants wrapped up their 2nd round, by picking defenceman Reid Zalitach from Winnipeg, MB. An offensive defenceman, Zalitach had 22 points in 30 games this year with the Winnipeg Sharks. Ripplinger believes he has the potential to be a power play quarterback. “Reid is a competitor that skates well and is highly skilled offensively.”

In the 3rd round the Giants went local, selecting defenseman Shaun Dosanjh from Richmond, BC. Already 6’0, 180 at 15 years of age, the Seafair Islanders product is a strong, physical blueliner who plays hard in his own end. “Shaun is a smart player who moves the puck well,” said Ripplinger. “His game isn’t flashy, but he is a very reliable player that you know you can count on when the game is on the line.”

With no picks in the 4th or 5th round, the Giants were itching to make a selection when the 6th round came along. With the 112th overall pick, Vancouver took forward Taylor Vickerman from Kennewick, Washington. He was the 5th U.S. born player taken in this year’s draft. After impressing all the scouts at the recent US Scouting Combine in Anaheim, California, Ripplinger was surprised he was still around in the 6th round. “You make a list and just hope some guys are there when your turn comes up, that was the case with Taylor. He works hard, plays with grit, and has a good shot.”

With size being the mandate 7th round pick Lucas Mercer of Port Moody, BC fits the bill. The 6’3, 170 blueliner was taken 133rd overall out of the Burnaby Winter Club. He is considered a project by Ripplinger with an impressive upside. “All year long Lucas constantly improved. He is a smart player who uses his size and reach very well. The biggest thing he will need to work on is his skating and mobility.” General Manager Scott Bonner had another pick in the round, but dealt it to the Kamloops Blazers in exchange for defencemen Kiefer McNaughton. Formerly a 4th round WHL bantam pick back in 2008 by the Blazers, the 6’3, 195lbs blueliner spent the last two seasons playing in the BCHL. Like Mercer, McNaughton is considered a project by Ripplinger. “This kid is big, strong, plays with bite, and isn’t afraid to stick up for his teammates.”

The Giants final selection of the 2011 WHL Bantam Draft was defencemen Tyler Leicht who was selected in the 8th round, 167th overall. He had 5 goals, 11 assists, 16 points, and 88 penalty minutes in 32 games played for the Grand Prairie Golden Arrow Storm of the Albert AAA Bantam league. According Ripplinger, Leicht is a bit of an unknown having missed the Albert Cup with mono. “I only got to see him twice this year, but I liked what I saw. A big guy with character who just happened to be his team’s captain this year.”

Overall, the goal at this year’s draft was to get bigger and stronger and the Giants were able to successfully accomplish that. All 9 players drafted, plus McNaughton who was acquired in a trade, stand 5’11 or taller. Head Coach Don Hay will get his first look at the players later this month, as all have been invited to join the 2010 draft class at the club’s annual spring camp.